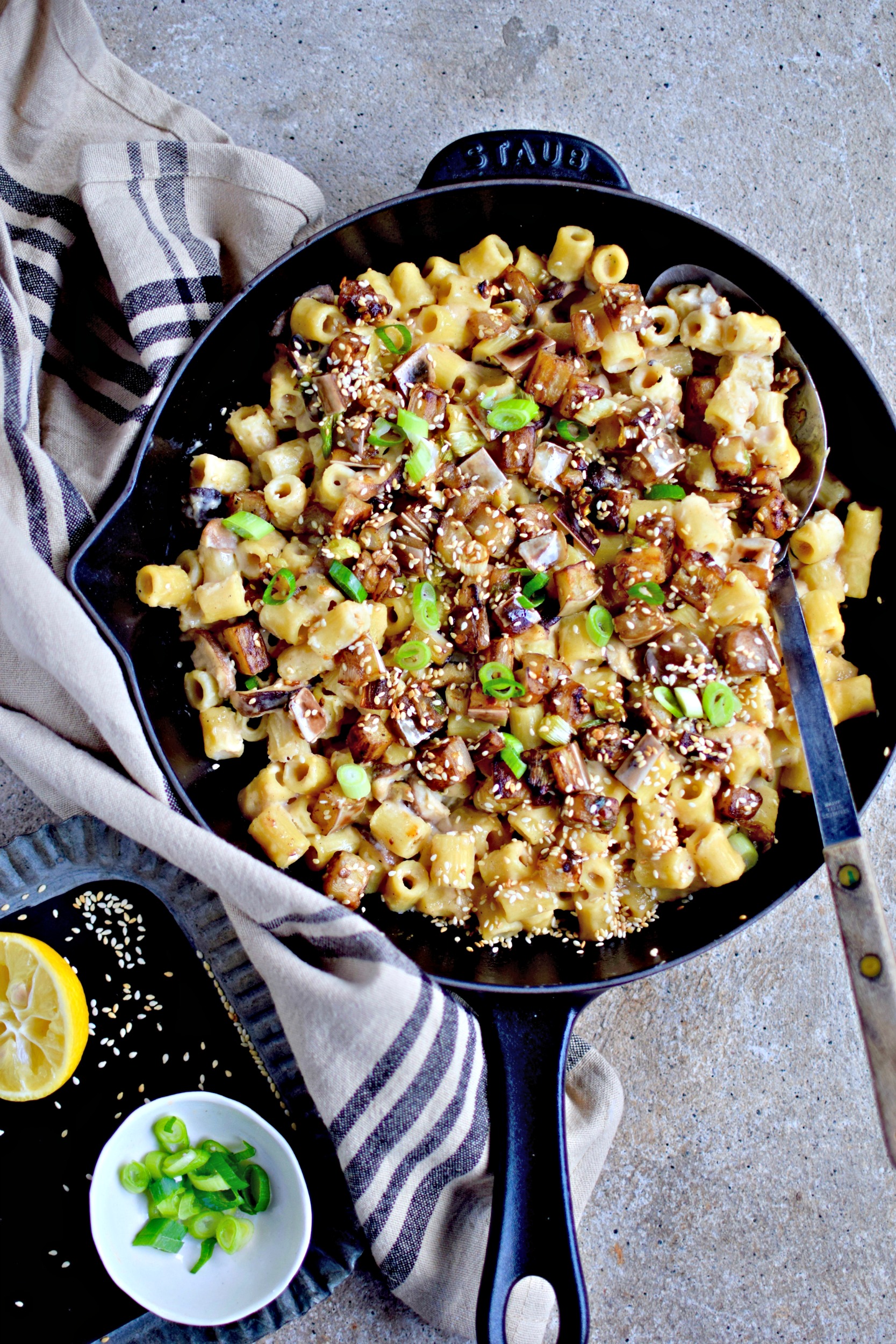 Easy blender “cheese” sauce with a savoury hit of white miso and shiitake mushrooms, mixed with cooked pasta, topped with tiny sesame eggplant cubes and slammed under the grill. Oh, and it’s vegan – although your non-vegan friends may never know!

Or rather, they shouldn’t go. But like other oddball combinations – carrots in cake, pepper on strawberries, um, potato chips on your PBJ – miso is MADE for mac and cheese.

Think about it. Mac and cheese, blandly comforting on its own, can be a bit one-note. I like mac and cheese but, if I’m honest, only as a scoop on the side of something more interesting. I never understood its appeal as a main course. I realise that I am in the minority, but even those of you who could/have(!) happily scoff a whole Pyrex dish of gooey macaroni cheese probably feel that it weighs a little heavy on the ol’ gut. Partly it’s the half pound of macaroni we’ve just inhaled. But the sauce is also a culinary lead weight.

Enter, miso. And a few other tweaks that not only amp the interest but give satisfying fiber and plant protein.

Miso – aged fermented soy beans – although Chinese in origin has been adopted into mainstream Japanese cooking over the centuries. Miso soup is the most well-known way to use it, but this delicious, intriguing umami paste is a key ingredient in marinades, sauces, dressings, glazes and even baking (look out for my sweet miso brownies in the near future!).

Types of miso. Varied intensity and age are denoted by the colour: the lightest is the least aged and mildly salty-sweet, while deep browny-red is usually quite salty and very savory – and sparingly used. Other ingredients vary the taste and nutrient profile – brown rice, white rice, barley. In this recipe, you can use whatever miso you have but I suggest two tablespoons of white miso (shiro miso) – which is actually light yellow – and one tablespoon of light brown “yellow” miso (shinshu miso). Yes, it all sounds a little confusing! But do stick with just the white shiro miso if you don’t have both or are buying it specially. I don’t imagine too many of you have a refrigerator boasting a variety of soy bean pastes. 🙂 Whatever kind you get do try and buy organic as non-organic can have some dodgy ingredients added.

The other rather “out there” ingredient is a can of white beans. Honestly, once you whack it in a blender with the other sauce ingredients it COMPLETELY disappears. No beany taste. I am a great one for getting distracted so the thought of making a perfect lump-free bechamel sends shivers down my spine. The blitzed bean trick just works. And adds much-needed fiber to a largely fiber-free dish. Oh, and although I’ve made this as vegan it is completely suitable to use with dairy cheese and milk. I want my recipes to appeal to anyone who likes mac and cheese but who also want to boost the flavour, texture and nutrition of this classic comfort food.

This is not a substitute for your Mom’s mac and cheese. I wouldn’t dare suggest it. But it is a fun way to make this typically waist-expanding recipe a little less so.

You could even just use the bean trick in your own, probably less Japanese-inspired, family recipe, skipping the faffy cheese sauce making stage altogether.

**Next time I’m back with another surprising use for beans, inspired by my home country AND my recent trip to the gourmet capital of the world, Lyon. How does a five-ingredient recipe grab you? I thought so. 🙂 **

Easy blender “cheese” sauce with a savoury hit of white miso and shiitake mushrooms, mixed with cooked pasta, topped with tiny sesame eggplant cubes and slammed under the grill. Oh, and it’s vegan – although your non-vegan friends may never know! xx

250g dried pasta shapes of choice (gluten-free if you wish)

2 tbsp olive oil, divided use (you could use oil spray if you really wanted it lower fat)

1/2 medium eggplant or one small one

1. Boil your pasta shapes according to packet directions, saving 60 ml of the pasta water or so to thin the cheese sauce.

2. While the pasta is cooking, thinly slice the shiitake mushrooms and saute in half of the oil until cooked through. Set aside. Add the remaining oil to the pan.

3. Dice the eggplant into small cubes – about 1 cm square – and add to the pan. Saute, stirring, until it gets quite golden. Add 1 teaspoon of miso, the lemon juice and sesame seeds. Saute until the lemon is absorbed and the eggplant is very soft and almost sticky. Stir in the sesame oil if using and set aside.

4. Now, the sauce. Add the beans, milk, mustard, garlic and onion powders, turmeric, pepper, nutritional yeast and remaining miso to a blender. Blend the ingredients until smooth and velvety; add the pasta water and blend again.

5. Pour the blended mix into a saucepan. Add the cheese and cook until melted. Use more cheese if you like for a gooier texture. Most vegan cheeses made for sauces will get gooey although they don’t melt ON things quite so well. Mix in the cooked mushrooms and the cooked pasta.

6. Pour the mac and cheese into a grill/broiler-proof dish (I used the Staub enamelled cast iron skillet that I sauteed the veg in) and top with the sesame eggplant.

7. Flash under a medium-hot grill/broiler until the eggplant sizzles and the sauce bubbles – about five minutes.  Serve warm with some steamed green vegetables and/or a crisp sharp salad.

* save the liquid from the beans for my next recipe!

Notes: I’ve adjusted the recipe to be cheesier than it appears here! Also, I’ve used only half of the eggplant on the top but do use as instructed. 🙂

Soft food diet: Use shiitake powder (or skip it) and blend into the sauce; use well-cooked small pasta; blend the eggplant and marble through the cheesy pasta.

I have loads of both eggplant/aubergine AND Japanese-inspired recipes. Peruse my messy recipe index (see tab at top of page) for inspiration!