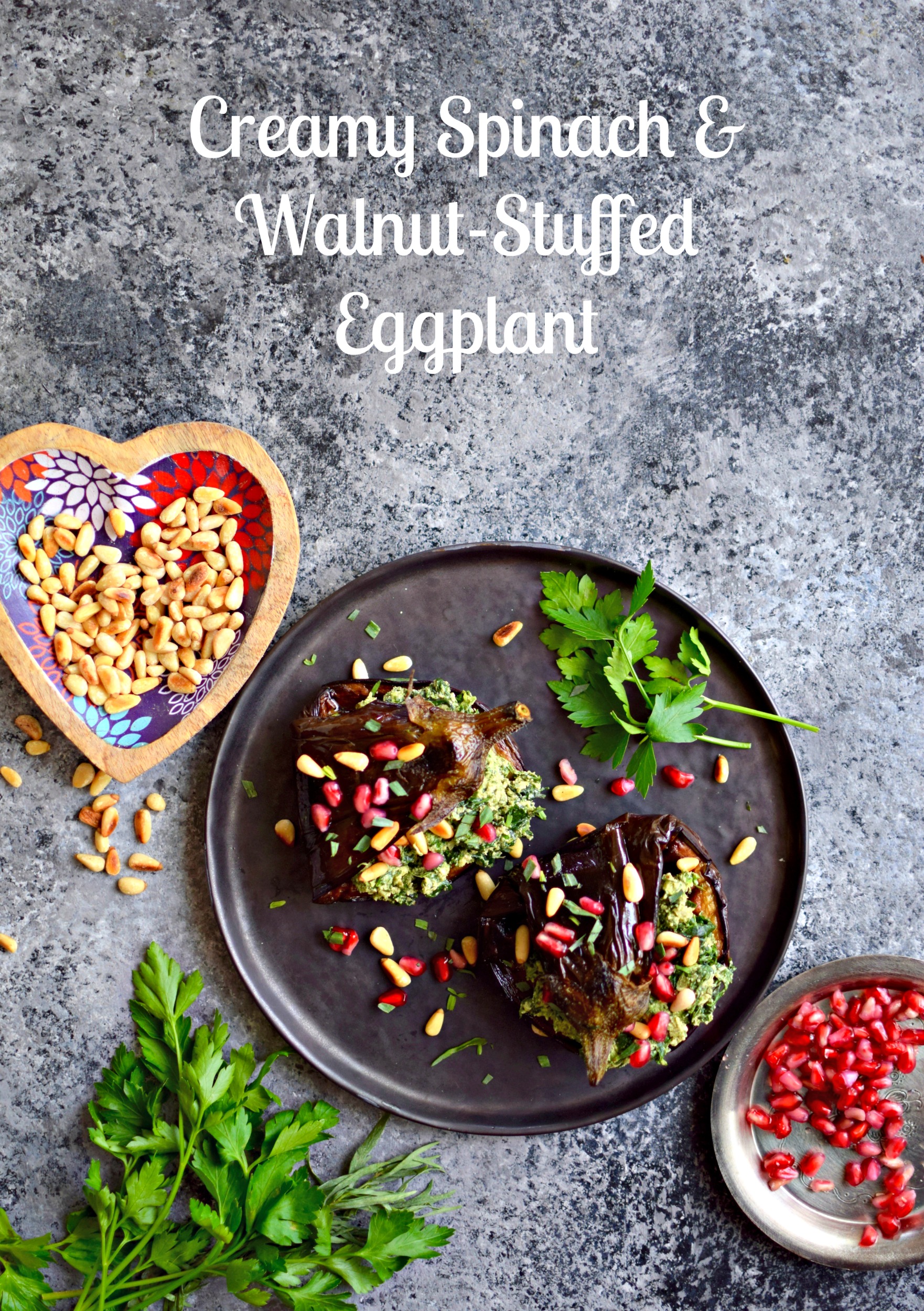 I so wish I could tell you that this lip-smackingly delicious recipe was born from a visit to the country of Georgia, but it wasn’t. The only Georgia I’ve been to is the Peach State one; the next state up from my home state of Florida.

No, this recipe is of mixed origin: part my own recipe for spinach phkali that I’ve only ever used as a dip, and reading from the glorious cookbook, Kaukasis: a culinary journey through Georgia, Azerbaijan and beyond, by Olia Hercules (and here is a UK link to Kaukasis). I looked at her recipe for aubergine rolls (badrijani nigvzit) and immediately knew I would make this with my long-forgotten deeply flavoured dip.

kaukasis, by olia hercules, and another cookbook I am loving right now, cook for #syria recipe book, curated by clerkenwell boy

The melting aubergine, gently charred under cover in my enamelled iron skillet, smeared generously with this creamy-textured, herb and spinach studded dip, is utterly divine. Soft yet impactful – a surprisingly uncommon trait in food, and one I love.

It’s been a long time since I made spinach phkali, a potent melange of chopped spinach, tarragon, coriander/cilantro, toasted walnuts, fiery garlic and haunting fenugreek.

I used to serve it around Christmas time at work as not only is it so unusual and intriguing to Western palates, but I decorate it with fresh tarragon and pomegranate seeds for a Christmassy look. A little kitsch, yes, but forgivable once tasted spread on good bread or scooped up with homemade pitta chips. And it’s naturally vegan, although everyone swears there is cream cheese in there somewhere.

Although bordered on the north by Russia (its former master), the mild Mediterranean climate means that the growing season of Georgia is long and prolific: aubergines, walnuts (a mainstay crop), sour plums, zucchini, spinach, pomegranates, grapes (the wines are very highly rated); but also hardier root crops like beetroot, and brassicas like cabbages as well as a plethora of culinary and medicinal wild herbs. They even use flowers as spice; not just how I would, as mere decoration and to hide burnt bits. Many of these glorious foods are melded into sauces and condiments that get daubed on and stirred into most any savoury dish.

Today’s peek at Georgian food is really just a toehold in the Caucasus, just a little dip (pun intended) in this Black Sea cuisine. A whole world of clashing and colourful flavours lies just beyond the spinach pkhali, and my take on badrijani nigvzit, but this should whet your appetite for more. It did me. And it could not be simpler.

If you are at all intrigued to know more about the cuisine of Georgia, as well as culture and travel tips, can I suggest you read my friend Sally Prosser’s articles? Start with this one about Georgian food, and carry through with her series. She has also written about Azerbaijani and Persian food and cookbooks. Sally (mycustardpie.com) is Dubai-based, but English at heart, and a superlative writer on food, travel and wine. Reading her posts and ogling her Instagram account always has me yearning to grab my passport and run to the airport to follow in her well-travelled footsteps. There isn’t a better travel writer out there.

*** Announcement:  I am now blogging with Metro.co.uk, one of the biggest online news sites in the UK (I also blog for another of the biggies, Huffington Post). I have only just started, debuting with my “Mastermind subject” – ha ha – turmeric. I will pop in a link here every time I post. Or, find out as soon as it is live by liking my Facebook page. Thanks for your support. I really appreciate it. Here’s the link to my Metro author page. And, to the turmeric article itself. Please share it if you find it of any value. 🙂

What cuisine do you love but have yet to visit the country of its origin?

***Inspired by a recipe in Kaukasis, by Olia Hercules.

2 medium eggplants or 3-4 small ones (Japanese)

1/2 quantity recipe for Spinach Phkali (I used frozen leaf spinach, cooked and squeezed of water; don’t add the spring onions/scallions; I only had parsley so use either cilantro/coriander or parsley)

Make up the spinach phkali and refrigerate for at least one hour – longer if you can, but bring out of the fridge to “warm up” a bit. This is really so the flavours will meld, so if you are in a rush, use just after it’s made.

Heat the oil in a large heavy frying pan – or as I do, in two iron skillets. Halve the eggplants lengthways and add them, cut-side down, to the pan(s). Cook over a medium heat until lightly browned and soft. Turn the halves and cook on the other side, slightly reducing the heat and adding a lid – the steam heat will help them cook evenly. I turned them another couple of times to get them very soft and meltingly charred. This takes about 20 minutes. They will collapse quite a bit and become foldable.

Cool the aubergines to room temperature and slather the cut side with the spinach dip. Fold and serve with extra herbs, pomegranate seeds and a drizzle of pomegranate syrup or squeeze of lemon. Serve with fresh plums or tomatoes, if you wish.

The leftovers are sublime mixed into hot pasta. For the dish in this image I had cooked and extra eggplant, cut it up and added it to the pasta, dip, a little more olive oil, chopped red chillies and more parsley. Chopped tomatoes added are also good, too.

***and loads more recipes and ideas from my Index