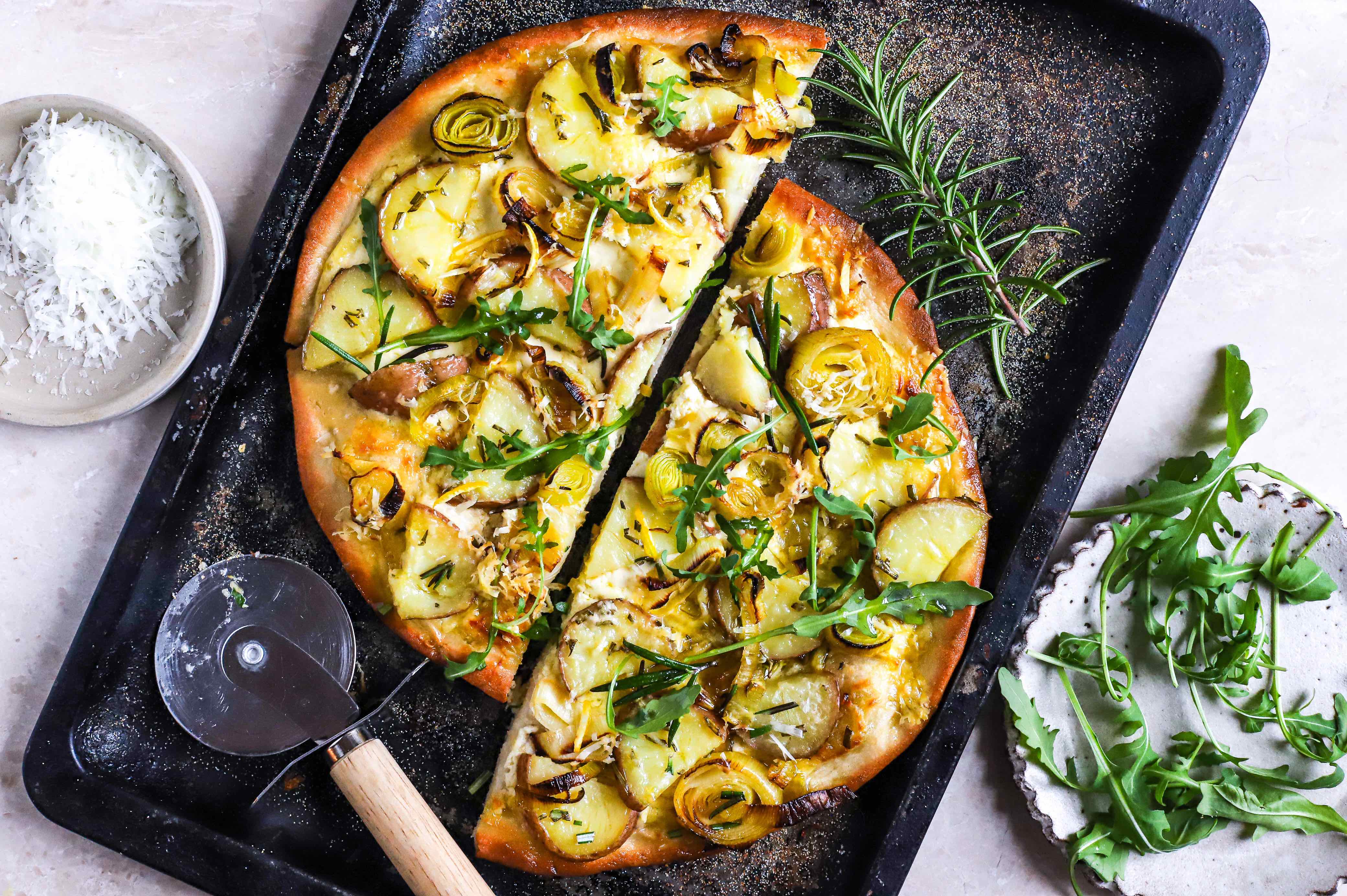 White Pizza with Rosemary Potatoes and Caramelized Leeks is a creamy style of pizza. Holding lemony créme fraîche, steamed potato slices and meltingly soft leeks, this pizza is a winner for family dinner. Make it tonight with bought or homemade dough. Or even a couple of ready-for-topping pizza bases!

All pizzas are good pizzas. Slicked with homemade “red sauce”, a shower of cheese and a few vegetables or some cured meat, few would turn down a slice or three. But is a pizza a pizza without tomato sauce? I say yes. Yes indeed.

My first encounter with a white pizza was memorable. We had traveled as a family to the south of France, ricocheting from one beauty spot to another in a tin can of a rental car; each tiny village more picturesque and impossibly beautiful than the last. Hugging the Côte d’Azur with the windows rolled down, inhaling the briny air, we headed inland to our next destination.

The scent of the sea soon gave way to lavender, with diesel and smoke layered on, as we wended our way up into the hills heading for Grasse. Soon enough we became astonishingly peckish. {France has a  way of doing that to you.} Away from all of the exquisite cafés and restaurants of Cannes, the road turned markedly more industrial. Oil drums and abandoned cars instead of striped awnings and wrought iron chairs.

When in France, just eat

As we drove on, the hunger grew. Luckily for us, eagle-eyed Andrew saw what he thought was a viable dining option up ahead. Driving closer my elation turned to incredulity: this truck stop, with 18-wheelers stirring up the dust of the arid roadside, was our lunch stop. To say I was disappointed is an understatement. I may have muttered something about grounds for divorce. But there were indeed other non-truckers there. Well-dressed non-truckers at that. Sitting in flimsy white plastic chairs at equally flimsy-looking tables, couples, families and singles were enjoying lunch under a flapping marquee, held in place with what I can only describe as tent pegs. It was quite weird.

Rachel, with her schoolgirl French, dearest desire for food, and the politest of manners, asked for the menu. We were wordlessly pointed to a greasy-looking white board, with faded, indecipherable script detailing the permanent-looking plat du jour, and more. Instead of asking for elucidation, we asked for 2 specials (although we had no idea what they were) and a pizza. Pizza blanc? Rachel replied, oui.

And what came through the tent flap was nothing short of astonishing to my 12-year old girl. And Andrew and me, for that matter. A bubbly-edged pizza, all white except for an enthusiastic pebble dashing of….. snails. I held my breath for a moment, expecting an exhalation of disgust. But no, our girl, who’s favourite snack as a toddler was raw broccoli, lifted a bent slice aloft, the garlicky, snaily juices pooling, and just started eating. She loved it. We loved it. We were fairly rhapsodic about our plat du jour, but its make up is lost in the mists of time. Unlike the escargot-covered white pizza, which turned into a very happy family memory.

White pizza is a perfectly normal style of pizza in Italy. Free of tomato sauce, a white pizza – pizza bianca – is an altogether more delicate affair than a typical tomato sauce-enhanced one. A ladies-who-lunch kind of pizza. Whisper-thin, with an almost cracker-crisp base, a white pizza possesses a subdued palette of olive oil, garlic and cheese. Sometimes olives, anchovies and herbs, too. And occasionally a smattering of ricotta to cushion the spare toppings. This is not a pizza to gladden the heart (and stomach) of a true Chicagoan (see how deep a Chicago pizzas is!).

What’s in this White Pizza with Rosemary Potatoes and Caramelized Leeks?

My version of a white pizza is a little unorthodox. Nothing new for me, of course. Although you can totally leave off the whitest ingredient and top your dough with the cooked potato slices and leeks, it is too good not to miss if at all possible. Or you can use ricotta. But the cool, acidic taste of a good quality créme fraîche with the lemon zest is eccellente. Use homemade or bought dough enough for 2 personal pizzas or one large family pizza. Or use quality pre-made bases. I like to keep The Northern Dough Company pizza dough in my freezer for a pretty decent pizza base at any time. If you are more of a red sauce pizza fan, you can’t do much better than – save, homemade – Crosta & Mollica pizza bases, already topped with a good smear of tasty sauce. These are made in Italy, with Italian ingredients.

Here are the ingredients for the Food To Glow White Pizza with Rosemary Potatoes and Caramelized Leeks:

Good potatoes (a red-skinned one is great; keep on that nutritious skin please)

Dough/Base(s) – see above for recommendation of bought dough

—-That, my good friends, is it! This pizza is loosely based on one that Andrew and I used to pick up from the corner pizzeria when we lived in the New Town area of Edinburgh. Where coincidentally we are back in while our house gets an extension – and new kitchen! Although the pizza place is still here, sadly this yummy potato-topped pizza didn’t stand the test of time. Their pizza also had fresh tomatoes and a plain tomato sauce. So, not a white pizza. But Andrew especially appreciated the thrill of double carbs. Or triple carbs, if you count the sandwich he would make with the leftovers the next day. Another true story!

I won’t drag you through the making process. I trust that you have rolled out pizza dough before. 😉

But if you wish to add snails, here is an intriguing recipe for escargot à la Bourguignonne pizza. I’d love to know if you make either my white pizza with rosemary potatoes and caramelized leeks, or this escargot-enhanced one. 🙂

Some pizzas on Food To Glow

Tuna and Créme Fraîche Pizza (a white one!)

So, what’s the maddest topping you’ve ever had on a pizza? Have you eaten a white pizza?

15 thoughts on “White Pizza with Rosemary Potatoes and Caramelized Leeks”