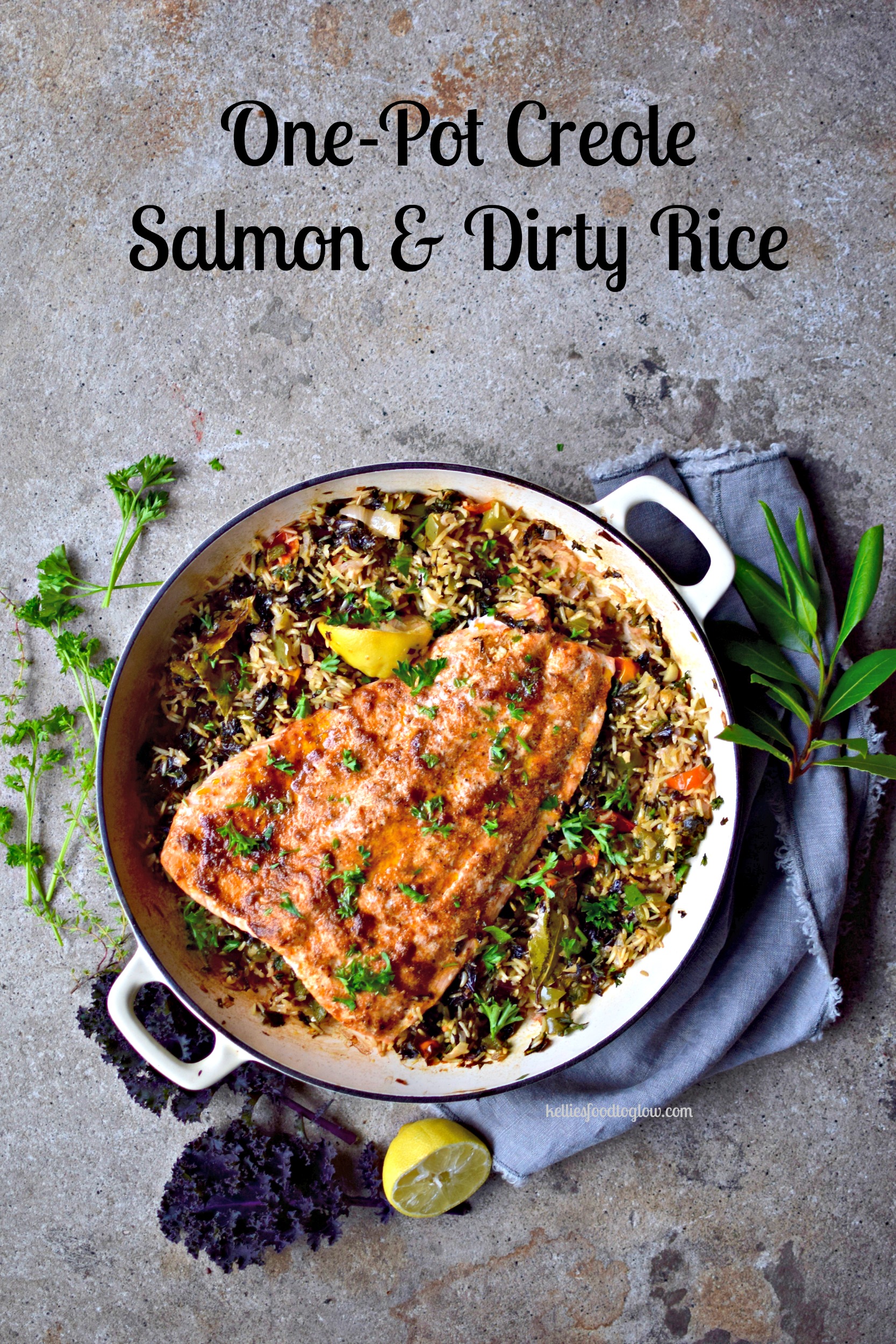 Pearly-pink salmon kept juicy with a coating of creole spices and olive oil, cooked over vegetable-filled “dirty” brown rice. A healthy, family-friendly and surprisingly quick and easy recipe for a midweek dinner. Leftovers are great cold in a wrap – lettuce or grain.

I’ve only been to New Orleans once. A long, long time ago – I’m talking more than 30 years – my parents took my little sister and me on a trip “out West”. On our sweltering way, in a classically 1970s station wagon, complete with bench seats, faux-wood panelling and no seatbelts, we spent the best part of three weeks meandering our way to and from San Francisco. From Florida. That’s a lot of miles: a lot of bathroom stops; a lot of diner stops.

These days such a trip, with the new-fangled highways, will theoretically take 40 hours. That’s with no stops. If you were covering over 2500 miles with a young family in the mid-1970s, with an engine that needs more rests than an NFL game needs commercial breaks, it takes a good deal longer than the stated three days there and three days back.

First of all the roads were terrible. Dangerous and terrible. And, if you were dragging kids to gawp down an impossibly deep hole in the ground (Grand Canyon, of course) and risk everyone’s lives with a long, deserted drive through an actual desert (Mojave; Death Valley), you also need to stop at every form of entertainment along the way. I can’t recall exactly where we stopped but one memory stands out: New Orleans.

It seemed impossibly otherworldly, like something from a noir movie, with its Creole cottages, balconied townhouses, and cluster of mixed architecture mansions on St Charles Avenue. Of course back then, to me, they were just glamorous buildings. But I still remember wishing I could live in one of those old, sometimes crumbling, buildings rather than my newly built house with zero history attached.

It was in one of those ornate and history-laden structures that I had my first taste of Creole food. If you don’t know what this type of cuisine is, I defer to thedailybeast.com to give a fair stab at defining Creole food : “Originating in New Orleans, Creole cuisine is the result of influences from the many nationalities who settled in the city. Creole food is greatly influenced by French settlers but also has significant traces of Spanish, Portuguese, German, English, African, and Native American cooking. Many think Creole food is a direct outgrowth of French cuisine, but it’s an amalgam of so many culinary styles that it is far less “French” than Cajun cooking.”

The main dishes you might have heard of are gumbo, jambalaya, etouffeé, and dirty rice. And beignets. I can still remember my first bite of a pillowy-soft beignet, dipped out of the hot oil by a wiry woman wielding a little wire net, and flung into a tray of snow white powdered sugar. At the same time, I was also allowed a sip of my mother’s intense chicory coffee, its smoky flavour making me feel very sophisticated – despite my orange terry cloth shorts and extremely unflattering haircut (my awkward stage).

I also sampled all of the above, including dirty rice. That’s how I found that I can’t “do” liver, or innards in general. The dirty in dirty rice, you see, is chicken gizzards. Frugal cooking for sure, and probably very delicious otherwise, with its herbs spices, onions, pepper and garlic. But I went to the bathroom and basically scrubbed my tongue with the underside of my shirt (also terry cloth so, in effect, a soft scrubbing pad). No amount of beignets was going to sort that out.

So, here I am today, revisiting the scene of that crime against my palate. In this version, I have used kale to recreate the muddy colour, the kale rendering down to a suitably sludgy hue in the heat and spice. I have seen other versions using aubergine. If you fancy that sub, just dice a small one up and saute in olive oil before adding to the rice. Or as well as the kale for a super-veg packed rice dish. Vegans, if you have got this far, slabs of tofu or tempeh dredged in the spicy oil will do just fine.

Unfortunately, I haven’t thought of a way to make beignets healthy. But some things are better left alone. Not unlike chicken gizzards and terry cloth shorts… 🙂

Do you have any food or fashion crimes to confess?

Pearly-pink salmon kept juicy with a coating of creole spices and olive oil, cooked over vegetable-filled “dirty” brown rice. Healthy, family-friendly and surprisingly quick and easy for a midweek dinner. Leftovers are great cold in a wrap – lettuce or grain. Make this recipe vegan by replacing the salmon with one or two typical packs of tofu or even tempeh – it’s very good this way. xx

1 stalk celery, diced (I used 8 lovage leaves from the garden)

200g cherry or other ripe tomatoes, chopped and saving the juices (use jar or tinned tomatoes if fresh not in season)

100g kale of any kind, chopped