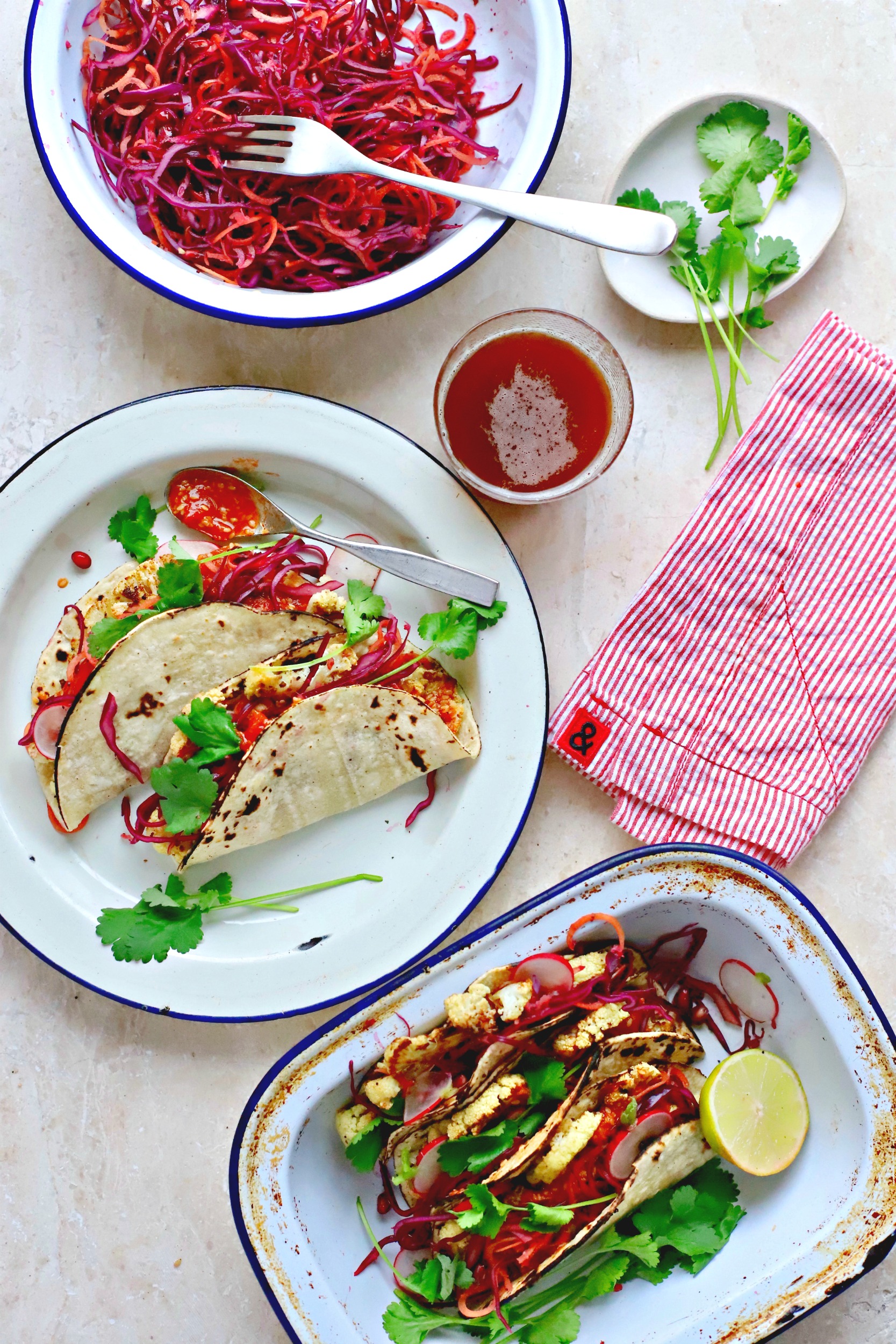 Steak-spiced cauliflower stuffed into charred tortillas and topped with a sesame-chipotle salsa and pomegranate-cabbage slaw. Make some for a light supper, or as part of a bigger buffet of Mexican dishes. Don’t forget the cold beer!

As usual, I have missed the boat with this one. Last weekend was Cinco de Mayo, and even though the UK is not at all influenced by Mexico, Cinco de Mayo seemed to get a fair amount of coverage. It would have been perfect to jump on here with these zesty cauliflower tacos. But I was distracted by all. that. sunshine. We were in our garden, at the beach, in the hills. Everywhere but in the kitchen. I did manage to find myself in there once or twice. For some chilled rosé. 😉

So, a slight tan and nearly one week later I bring you what I have been making variations of for a wee bit now, Cauliflower “Steak” Tacos.

How to turn a cauliflower into a steak (not really)

The “” around the word steak is not an affectation. Or, at least I don’t mean it to be. It’s just in case there is anyone in the world who might think this recipe has both steak and cauliflower.

The French would not be amused at my juxtaposing the words cauliflower and steak. They have just recently adopted a kind of separation of Church and State thing, but with vegetables and meat. It seems quite silly and nanny state to me.

Let them eat Cauliflower! But not dressed up as a steak.

Anyway, the steak bit refers to the seasoning blend, one I’ve played with, trying to mimic the savory, herby McCormick’s stuff I grew up with, but without the unnecessary salt. I HATE seasoning blends that include salt. Let me add my own salt, thank you very much. The added salt and sugar is why I often make my own blends. I confess to spending an inordinate amount of time trying to decode labels, with their infuriating list of ingredients that give the obvious ones and then sign off with “and a blend of herbs and spices”.

I think this homemade, salt-free one is pretty good. It pairs well with the assertive taste of cauliflower. And  it would indeed be just dandy with actual steak. Or with other veggie things: blended into a bean dip or tossed through sweet potato wedges for roasting, spring to mind. You will be making a little more than you need for the recipe, so jar up the rest and try some in your next dip.

The whole recipe is pretty straightforward and simple, so don’t be daunted by the list of ingredients. For the cauliflower, just cut it into fat florets and then into slices. Like mini steaks, I guess. Then you toss the slices in oil and some of the seasoning blend, then roast for a short spell while you make the salsa and slaw. As for the salsa, it’s a briefly cooked one of chopped tomatoes (I used fresh but you can use canned), chipotle in adobo sauce, sesame seeds and a few other store cupboard things. Once made it will keep for a week, so make more than you need. It’s tangy, spicy and a teensy bit sweet. So good!

cauliflower tacos for breakfast (scrambled eggs in there somewhere)

In the event of leftovers

I made this recipe as a light supper dish, but I had some leftovers of everything bar the salsa, so I scrambled up some eggs and turned it all into a funky breakfast. I was so glad that I had prepped more as this was a great way to start the day. The cauliflower was briefly warmed in a hot pan while I waved the corn tortillas over a gas flame and scrambled some eggs. Then, for the spice factor, I swirled together some yogurt and bottled hot sauce (or I could have used my peri peri sauce if I had some). I rolled up my two fat little tortillas and ate them, mindfully and joyfully, as I headed out the door. Never realising that ruddy Cinco de Mayo was the next weekend….

Do you think we should adopt the new French attitude to banning meaty names for vegetarian “alternatives”? Is anyone ever confused between a bean burger and a cow burger??  What did you get up to for Cinco de Mayo?

**PS See the beer in some of the images? Well, that’s not beer. It’s a little trailer for an upcoming post on how to make your own healthy, fermented (!) summer soft drinks. But gosh, doesn’t it look like a beer!

Steak-spiced cauliflower stuffed into charred tortillas and topped with a sesame-chipotle salsa and pomegranate-cabbage slaw. Make some for a light supper, or as part of a bigger buffet of Mexican dishes. And don’t forget the beer! xx

Pinch of cayenne or other hot chilli (optional)

1 very big tomato or 3 medium ones, chopped with juices kept

2 tsp – 1 tbsp freshly grated ginger (according to your taste)

1. Mix up the seasoning blend then use a heaped tablespoon to toss into the cauliflower and oil, adding a little salt if you wish. Place the cauliflower on a baking tray(s) and roast at 180C fan/200C/400F for 15-20 minutes or until the pieces are golden but still with some “bite”.

2. Make the salsa by warming the oil over a low-medium heat in a small saucepan and adding the garlic and sesame seeds, stirring for about three minutes. Add the rest of the salsa ingredients and bring to a fast simmer. Let this cook down until the tomatoes lose their structure and it looks and tastes “jammy”. Set aside.

3. For the slaw, finely slice/mandoline the cabbage and grate or mandoline the carrots. Toss all of the slaw ingredients together and adjust to your taste. You might want a tiny bit of sweet.

4. When the cauliflower is ready, heat two gas burners on low-medium and set a tortilla on each, checking and flipping with tongs so as not to burn them. You want just a hint of char and for them to be pliable. You can also heat these in a dry skillet. Pop the cooked ones onto a tray and place in the still-warm oven while you prep the rest.

5. Now it’s just a matter of evenly adding the fillings and garnishes to each taco. Eat warm. For a heartier meal, make some tomatoey Mexican style rice or heat up some refried beans.

I’ve also spotted this gorgeous cauliflower steak (with yummy bits and bobs) recipe from the talented and fêted Niamh at Eat Like A Girl. I am making it as soon as I possibly can.

If you make this recipe and are on Pinterest, save the pin below of my taco recipe and click the ‘comment and share’ button. If you are on your phone and have the Pinterest app you can take a pic while you are on Pinterest. Just click on the ‘add a photo or note’ button and the app will turn on your camera. Pretty cool, huh? And don’t forget to follow me on Pinterest. I’m Food To Glow over there too. I would love to see what you make of mine! And, of course, I’d love to hear from you below in the comments as well. 🙂