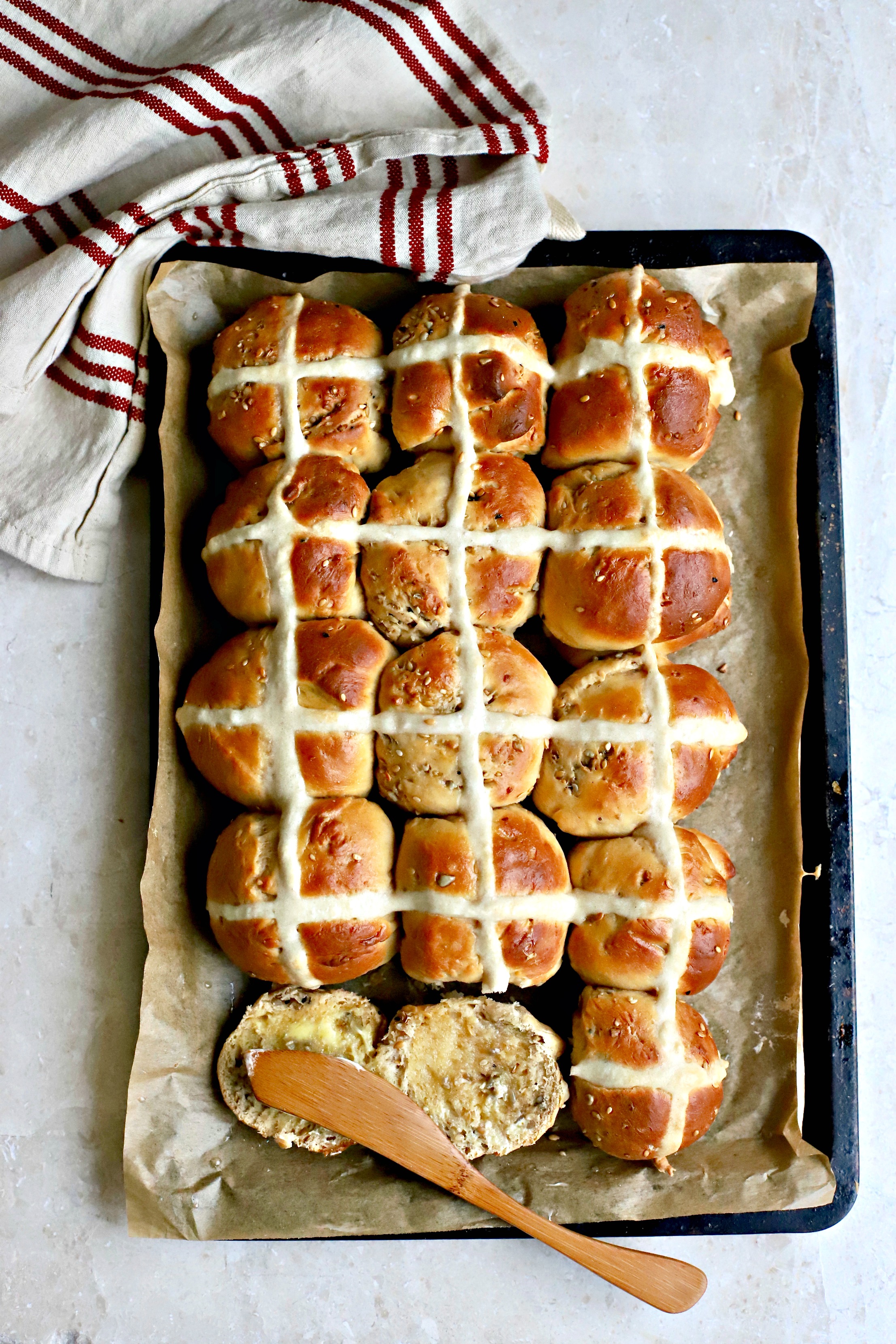 A gently savory yeasted and seeded bun for slathering in butter. These are lovely spread with a little soft cream cheese and topped with thinly sliced cucumber, too. An Easter-time treat.

Delicious, pillowy, raisin-studded delights traditionally eaten at Easter. So, not these then. Well, not the raisin part. The above image is of Hot Cross Buns. But not as you know them.

Whether you are religious or not, I’m sure by now you’ve slung at least one packet of hot cross buns into your shopping trolley. Waitrose seems to have the most enticing iterations of this seasonal bake (I like the chocolate-orange ones).

But have you ever seen a savory one? Me neither. So I thought I would remedy that.

To be honest, I’m not sure where I got the idea from. I just kind of woke up one morning and had a huge urge to find out how a savory hot cross bun would taste. Should it be cheesy? Should it be spicy? What about herbs? I wasn’t sure. And then, as I was standing with a notebook waiting for my toast to brown, I saw the Marmite. Bingo.

Love it or hate it, Marmite is my ultimate savory ingredient

Andrew was out for an early run, so I was free to get stuck in without him interrupting my creative/messy thang by rummaging for something to eat (the Saturday norm). I took over the whole counter with jars of seeds, eggs, flour, bowls, more flour, yeast, and sticky, brown Marmite.

Marmite, for those of you not inculcated with British food tradition, is a most unlikely foodstuff. Some would say yucky foodstuff. The name is even used as British code for something you will love or hate. As in, “he is human Marmite. You either love him or loathe him”. You get the picture. Their latest ad campaign even plays on this polarising effect.

In essence, Marmite is a vegan yeast extract spread with added secret ingredients. And it is gorgeous.

It is odd. And smelly. But many people – myself included – love, love, love Marmite. On the basis that it is extremely savory, it instantly qualified, on first taste 30 or so year’s ago, as my favorite condiment. This strange, addictive glossy-brown glop is the first thing I reach for to give a sauce (a dark one) depth.

It is the very definition of savory. And is deeply, deeply umami. I even used to take a little pot on holiday with me for breakfast emergencies. Other than toast, sauces and hot cross buns, it is glorious stirred into browning onions, vegetable bakes, these savory Chelsea buns (another pastry that is always sweet), pasta (with butter too – heaven!), soups (especially bought ones you wish to gussy up) and even added to brownies (miso is great here, too).  But a little goes a long way. If you can’t get Marmite, I would bet about 3 tbsp of nutritional yeast flakes – “nooch” – would work well, too. If you prefer the Australian version of Marmite, Vegemite, use that instead. Perhaps adding a bit more to account for its milder taste.

So, how did that first creative stab at savory hot cross bun making go? Meh. The flavour was great (a huge thumb’s up from Andrew), but the texture was a bit rubbish. I knew fairly soon that all was not going to go well. The yeast was a dud, and when I checked the teeny tiny print I saw that it had expired two years earlier. Oops. We managed to eat the small test batch in the day though. #nowastekitchen  Butter saved the day on that batch 🙂

Two batches later, and with in-date yeast and whole milk, these buns are pretty darn good.  Another previous mistake was that I had used almond milk – not high enough in fat to work here. If you need it dairy-free it will be good but you need to use something higher in fat. This helps the dough to be soft.

How To Eat Hot Cross Buns

Hot cross buns of any persuasion are best eaten freshly baked. Bought ones will have stuff added (usually enzymes) to keep them soft for a dew days, but homemade ones – i.e. the BEST ones – deserve your immediate and undivided attention. After the first day, hot cross buns are ideally eaten after first lightly toasting under your grill/broiler and buttering. I might try adding a little vinegar to a subsequent batch to see if that extends their life, but honestly, once made they really won’t last long anyway (chomp).

Hot Cross Buns are something that many people now eat all throughout Lent, but most especially on Good Friday when sweet, sticky fruited buns are traditionally eaten. If you fancy subverting tradition a little, and want to save the sweets for chocolate on Easter Sunday, why not give these a whirl?

Do you start buying hot cross buns as soon as you see them in the shops? What’s your favorite kind? Do you want to just skip over the buns and get straight to the chocolate eggs??

A gently savory yeasted and seeded bun for slathering in butter and using as rolls for mini sandwiches. These are lovely spread with a little soft cream cheese and topped with thinly sliced cucumber. An Easter-time treat. xx

**Instruction method adapted from this recipe on bbcgoodfood.com

500g strong white flour or spelt flour (I use the latter)

1/2 tsp kalonji seeds/nigella seeds/black onion seeds (so many names for such a tiny seed!)

Bring the milk to a fast simmer, then remove from the heat and add the Marmite and butter . Leave to cool until it just warm. Put the flour into a large mixing bowl. Make dents in the flour for the sugar, salt and yeast, and a well in the centre. Pour in the warm milk mix, then add the egg. Using a wooden spoon, stir well, then mix everything together with your hands until you have a sticky dough. Knead the dough a few times in the bowl before tipping out onto your floured countertop.

Knead the dough by holding the dough with one hand and stretching it with the heal of the other hand, then folding it back on itself. Turn it a quarter turn for each knead. Repeat for 5 mins until smooth and elastic. Put the dough in a clean and lightly oiled bowl. Cover with cling film and leave to rise in a warm place for 1 hr or until doubled in size and a finger pressed into it leaves a dent (see image below).

Press one hand deeply into the dough and add the seeds. Knead into the dough, making sure everything is well distributed. I tend to heave it back our onto the counter and do this, but you can keep it in the bowl. Leave to rise for another hour, or until doubled in size, again covered by cling film.

Divide the dough into two fat sausages and cut to make 14 or so pieces. Roll each piece into a smooth-ish ball (i.e. not like mine!). Place the dough balls on one or two baking trays lined with baking parchment, leaving enough space for the dough to expand. Lightly cover with more cling film, or a clean tea towel, then set aside to rise for 1 hour more. Yep, three rises in total.

Heat oven to 220C/200C. Mix the “Cross” flour with the 5 tbsp water to make the paste for the cross. Spoon into a piping bag with a small nozzle or as I did, into a small plastic food bag, snipping a bit off the end. Pipe a line along each row of buns, then repeat in the other direction to create crosses. Bake for 18-20 mins on the middle shelf of the oven, until golden brown.

When you pull them from the oven, heat the butter and brush over the buns. Eat warm. Leftover buns are best reheated in a foil parcel.