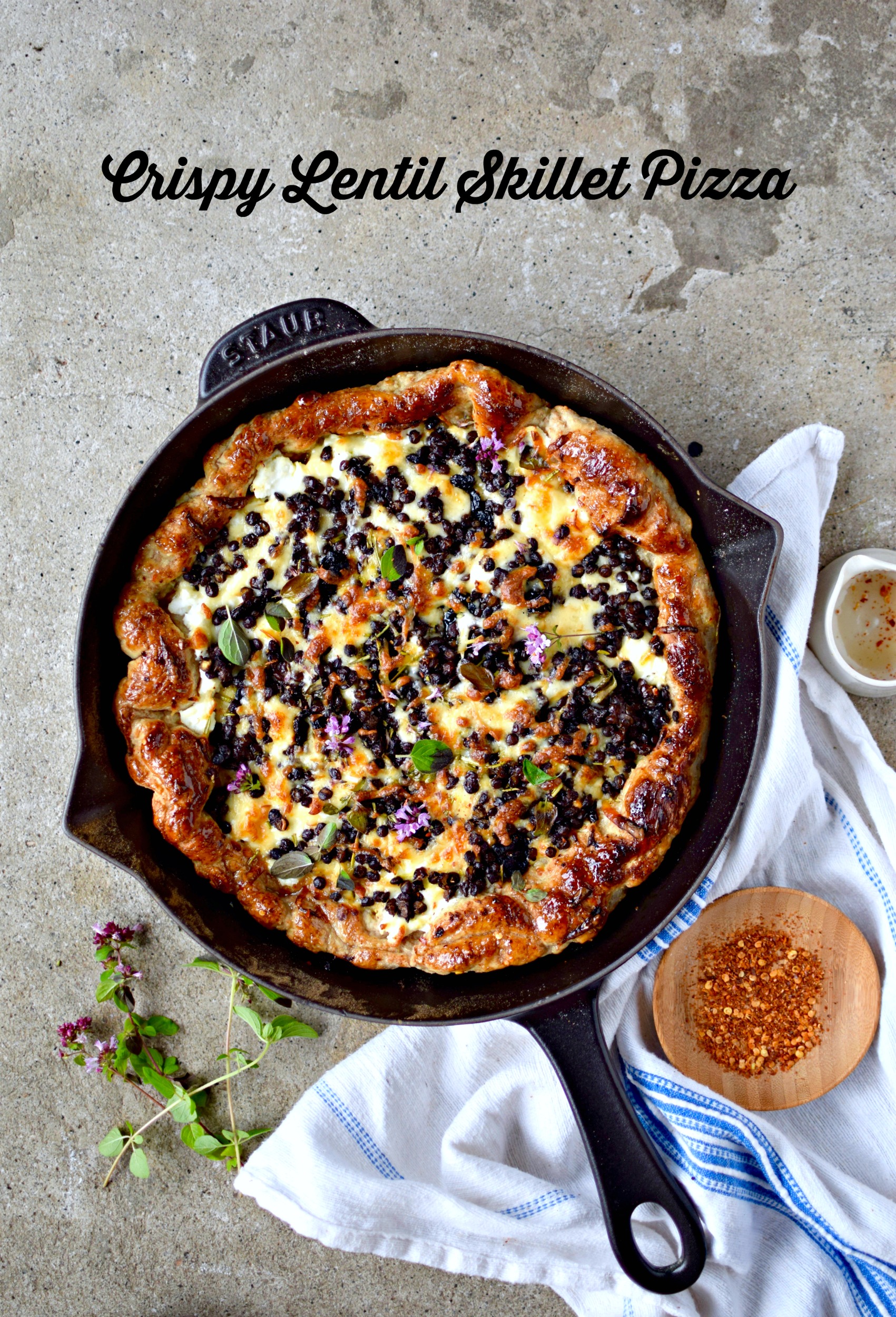 Make pizza in a cast iron skillet for an easy and healthy midweek meal that the whole family will love. Use my quick wholewheat dough – or a pre-made – and top with smoked mozzarella and cooked lentils for a delicious, vegetarian deep-dish dinner, or hearty snack. Vegan adaptations are given.

This didn’t start out being about how to make pizza in a cast iron skillet. I was really just wanting to push the idea of using lentils as a topping – oil-crisped and studded over melting smoked mozzarella and ricotta.

But then I had a brainwave – a memory actually – that made me a little dizzy.

I have put together this combination a few times to cover my standard wholewheat dough, rolled out thin as you like and painstakingly transferred to a hot peel. But whether or not I topped the dough at high speed directly onto the hot peel, or loaded up before transferring, I was never satisfied with the look. It certainly never got its photo taken for the all important Insta. Not quite a circle, not quite a rectangle; more the half-hearted effort of a surly teen.

But I had tried!

I love a thin crust, bubble-edged pizza, nearly sooty in places (I know, I know. Not so healthy.). But when thin is in, hefty toppings are out. And dammit, I want ricotta AND mozzarella AND lentils.

In a flash, I remembered something from way back in the recesses of my mind. Back there, with the memories of Dynasty shoulder pads, bad perms and bran muffins, I found a skillet pizza.

In the late 1970s and early 80s I had a wonderful boyfriend named Mark. He was a genius-level mathematician, and also a computer geek back in the days when no one had personal computers. He and his pals would sit around for hours through the night designing elaborate programs for their souped up, bespoke machines; fiddling with Rubik’s cubes while they argued on whether C, C++, or even old-school COBOL was best. I didn’t understand any of it, and lovely person that he was, he didn’t try and make me understand – or mock me for not wanting to try.

We did normal stuff as a couple: movies (he looked like Kurt Russell. Really.), eating out, going to the beach, skiing behind his Dad’s boat. But his first love was solving problems. I think if he were still alive he would have been a Bill Gates figure. I sometimes wonder what he would have invented that we would all be using. In any case, I know he would have loved that the world has embraced technology, and wear computers on our wrist.

What does this have to do with pizza? Well, a lot really. Like today, when gamers are gaming they forget everything else around them. They lose all sense of time, space, thirst and appetite. Back in those days I don’t think there was the same level of obsession, but taking a break to eat properly was certainly not a priority. Mark’s solution was not to bung something pre-made into the oven (there wasn’t really the selection back then, tbh) but to take a hunk of his Mum’s frozen bread dough, let it defrost (which took approximately 30 seconds in the Florida heat), press it into a well-used skillet, throw on some sauce and cheese and, wham bam, a hearty programmer’s snack.

I was only once treated to this clever trick. Even back then I was an adventurous eater, and Mark was kind enough to save up money to take me to places he knew I would like: it was with him that I first tried Japanese food. But having just recalled this early invention of his, I wonder if he was not only a maths genius, but a culinary one as well.

Do you have any food memories that take you back to a certain place and time?

Make pizza in a cast iron skillet for an easy and healthy midweek meal that the whole family will love. Use my quick wholewheat dough – or a pre-made – and top with smoked mozzarella and cooked lentils for a delicious, vegetarian deep-dish dinner, or hearty snack. Vegan adaptations are given. xx

1 tbsp coarse cornmeal or polenta – this is for the skillet

100-150g best ricotta cheese – full-fat (vegans, use cashew ricotta or something like Tofutti soft cheese, adding some lemon juice to it)

Zest from half an unwaxed lemon

100g smoked scamorza mozzarella (vegans, perhaps use Smoked Risella – I’ve not tried it) – more cheese if you like it very gooey

Essential equipment – a well-seasoned cast iron skillet. I love my Staub one, but I also like my old Le Creuset. It’s worth getting a good brand (they aren’t cheap, but look for them on discount sites and second-hand shops) as cheaper ones are hard to “break in”.

Dough tip – the whole dough recipe will make two 10-inch skillets of pizza but the recipe below is for one, so scale up the toppings if you wish. What is shown in the images is for using two-thirds of the dough in one pizza (too thick for me, but the family liked it) and a smaller cast iron skillet for another. My advice, unless you like quite a thick crust, is to use half the dough quantity for one pizza. The dough freezes well. Of course use your own dough recipe or pre-made if you like.

Make up the dough as directed in my wholemeal pizza dough recipe (about 500g/half a pound) and use half for one pizza. If you like quite a thick crust, use two-thirds of the dough. Use both hands to hold the dough and make a rough circle that is almost as wide in diameter as your skillet.

Heat the skillet on the hob/stove for a couple of minutes until almost smoking, sprinkle with the cornmeal and carefully lay in the dough (shown below), pressing the dough as needed to make a fairly even lip. Turn the heat down to low-medium and let the dough cook for about three to four minutes, or until it starts to puff up.

Smear the seasoned ricotta over the base and top with the grated smoked scamorza mozzarella. Scatter over the lentils and herbs. Brush the crumpled edges with the glaze and slide the hot skillet into the oven – the handle will be hotter than the sun, so take care.

Bake the pizza for 12-15 minutes, until the lentils are crisped and the cheeses are pleasingly gooey. Top with herb flowers and torn herbs if you wish. Serve with a green, sharply salad dressed.

Variation: use your favourite marinara sauce instead of or as well as the cheeses. We’ve also topped this with chopped Tofurkey Italian style vegan sausages and sliced peppers – so good!