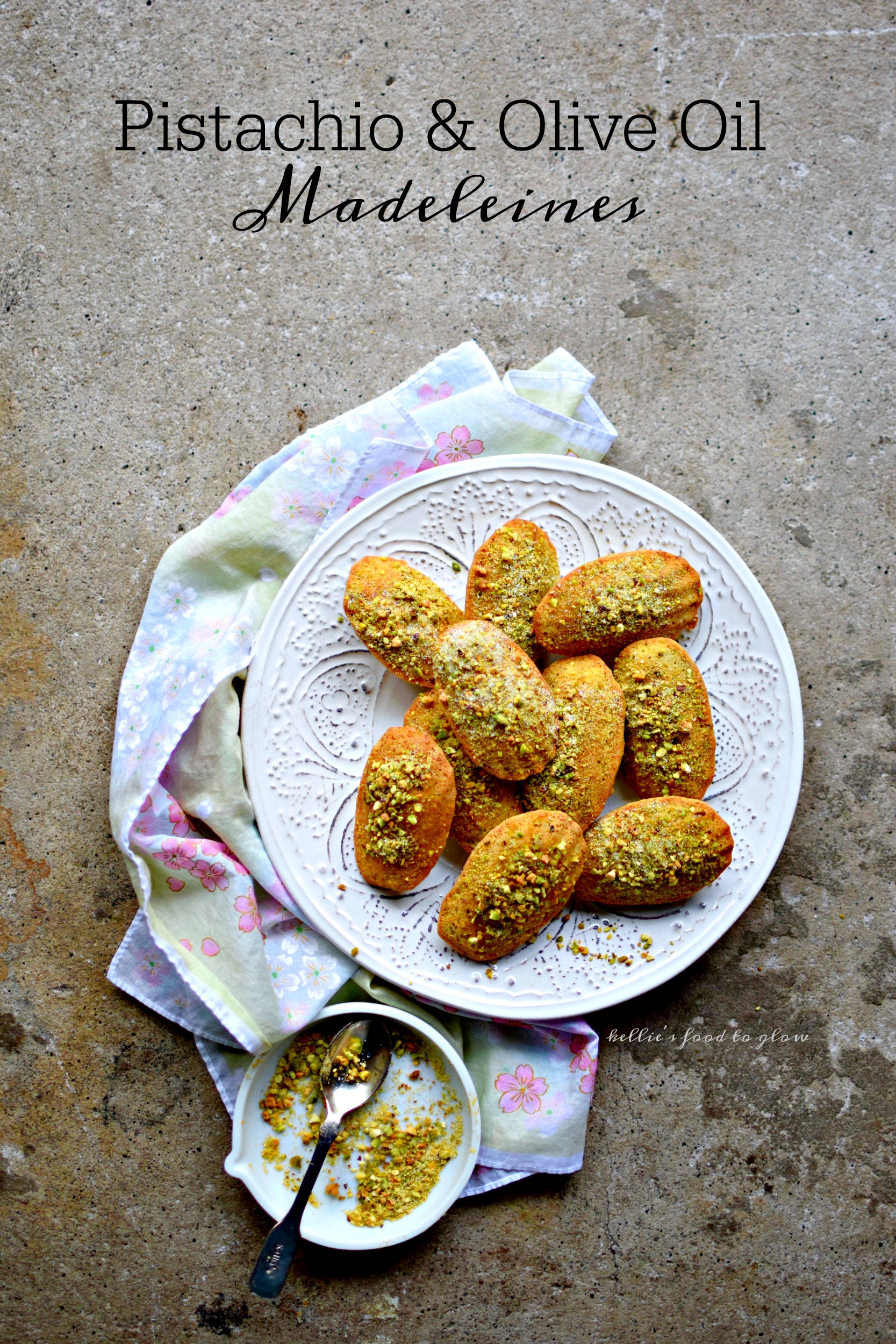 Perhaps one of the most literary of foodstuffs, madeleines are surprisingly easy to make. These tiny scallop-shaped cakes are given a 21st century makeover with olive oil and pistachios – and a touch of yuzu if you have it. Dip into a steaming cup of tea and see what happens!

I didn’t grow up reading Marcel Proust. His novels, featuring vaguely identifiable characters (we see his aristocrats and preening middle classes even today), convey in handsome detail, through ribbon-like streams of consciousness, not just what is perceived, but also what is remembered. I know that now, but for a long time a “Proustian moment” was lost on me. The connection with madeleines wafted straight over my Ludlum-loving head.

In Swann’s Way, the first of seven volumes of Proust’s most famous – and epic – work, In Search Of Lost Time (“À la recherche du temps perdu”), the narrator (all of the volumes are narrated) is swept into deepest childhood while dipping a golden madeleine into a cup of tea.

“No sooner had the warm liquid mixed with the crumbs touched my palate than a shudder ran through me and I stopped, intent upon the extraordinary thing that was happening to me.”

I can’t in truth fathom how this simple little, biscuit-sized cake could evoke such gushing feelings to spill over seven inward-looking volumes of prose. Proust describes madeleines as “… one of those squat, plump little cakes called ‘petites madeleines,’ which look as though they had been moulded in the fluted valve of a scallop shell.” Indeed they are. Or a metal facsimile.

Despite their simplicity, like the equally humble chocolate cake, madeleines have been shaped and moulded by the experiences, desires and memories of others. The formula of eggs, flour, sugar and butter has been on the go since the mid 18th century, with various bakers imprinting their own style along the way. From the simple lemon flavour in the (alleged) original recipe, to matcha tea of 2017, madeleines are a perfect companion to a cup of hot tea.

Today’s version is mine. I make no apologies for it being not much like the light and lemony madeleines of Proust’s day, but it is delicious nonetheless. I have cheekily replaced the butter with fruity olive oil (sacré bleu!), replaced some of the flour with ground pistachios, and attempted a flirtation with yuzu powder (sadly overwhelmed by the pistachios). The lilting tang is still there in the form of zested grapefruit. I might play with adding yuzu tea (marmalade) to the mix another time, or be content to glaze it with this more commonly available foodstuff instead.

Right now I am very satisfied with a slick of olive oil and a dusting of mixed ground pistachio, yuzu powder and sugar; be normal and drop the yuzu powder if you like. I had picked some up cheaply in Kyoto and have been dying to bake with it. For me it it’s the yuzu that evokes memories. 🙂

Does any food evoke memories for you?

2. Add eggs to a large mixing bowl with the 60g sugar and whisk with electric beaters until very thick and doubled in volume.

3. Sift the flour and soda bic (and yuzu if using) over the egg mixture and gently fold in, taking care not to knock down the volume too much. Follow with the olive oil and vanilla extract if using, trickled in the side of the bowl. Sprinkle over 40g pistachios and grapefruit zest, again folding carefully.

4. Spoon the batter equally into the prepared madeleine trays or shallow bun trays – up to one rounded tablespoon per indentation, and no more. If time allows, chill the filled trays for an hour before baking. Slide into the preheated oven for 9-10 minutes: my buns were ready in 9 minutes.

5. While the cakes are baking, mix the extra nuts and sugar – adding yuzu powder if you have it.

6. Pop the cakes from the tin and immediately brush with the extra olive oil and dust with the nutty sugar. Eat immediately with a pot of English Breakfast tea or Earl Grey tea.