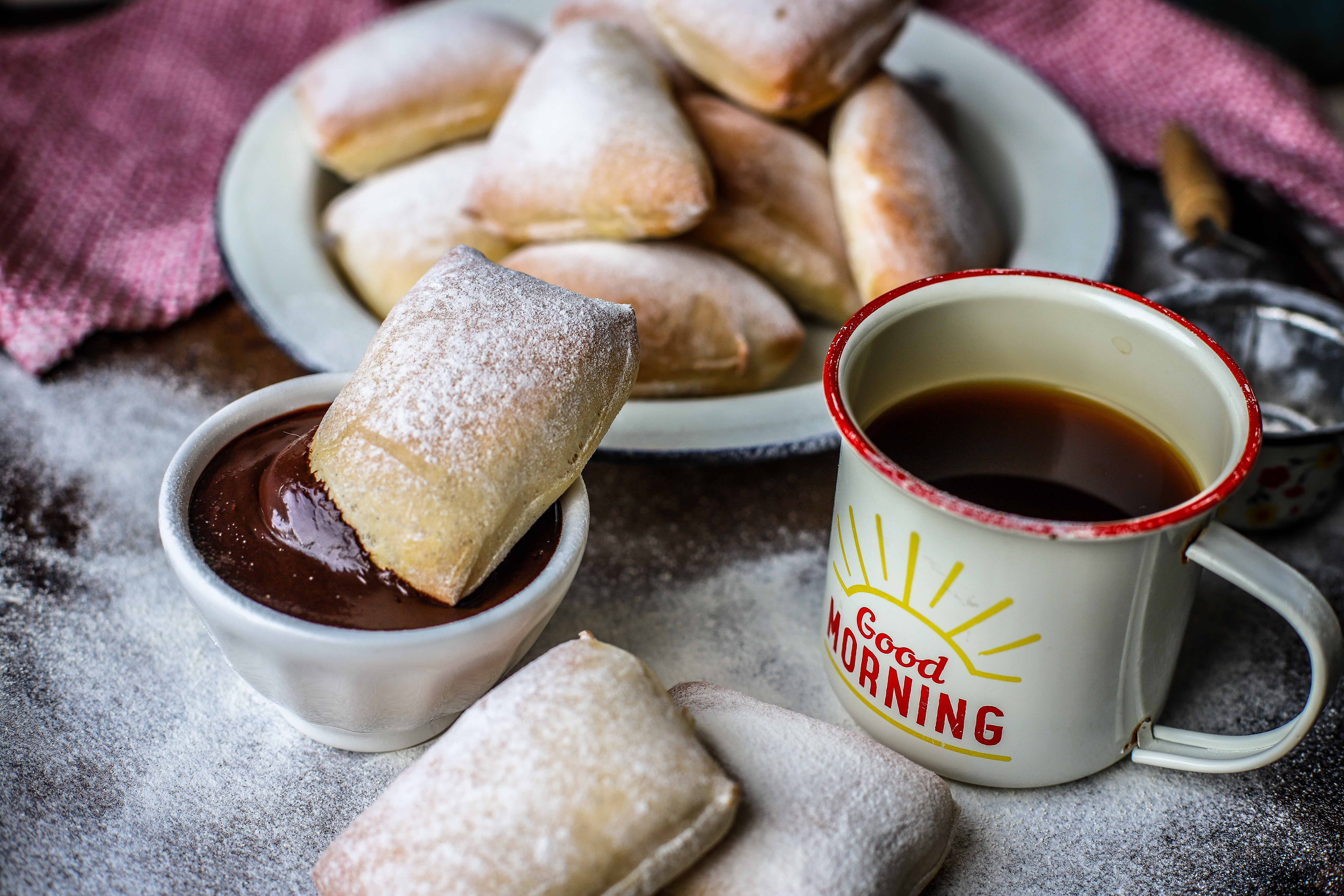 Why not celebrate Mardi Gras – aka Fat Tuesday – with these baked beignets? Traditionally these delicious, pillowy square doughnuts are almost always fried and then showered in confectioner’s sugar. My Food To Glow version is a little bit healthier – and a lot of bit tasty. Especially dunked in warm chocolate dipping sauce. So, grab a cup of cafe au lait and read how you can make these New Orleans pre-Lenten treats.

I know we are on the cusp of Pancake Day – or Shrove Tuesday, if you are up to speed on the Christian liturgical calendar. But instead of celebrating with pancakes, I’ve gone to New Orleans – and their exuberant Mardi Gras celebrations – for inspiration.

Beignets are a traditional sweet pastry fried up around the city at all times of the year, but are an essential part of the week-long festivities leading up to Mardi Gras. I’ve had the pleasure of tasting the lauded Café du Monde version and, although this was 40+ years ago, I actually remember it well.

I recall the excitement of getting a table after a long wait in the sweltering Louisiana heat; of finally biting into the hot, crisp-soft fritter, my face getting covered in a puff of white confectioners’ sugar. I remember my dear parents sipping the near-obligatory chicory-infused cafe au lait from thick, white mugs, offering me a small sip. It was soooo bitter, but I loved how different it tasted to the mild drip coffee that was the norm at the time. I am sure that my sister and I would have had a contest to see who could resist licking their lips the longest. I am also sure that she would have won.

Beignets have been eaten in France since at least the 16th century, and probably earlier in Andalucian Spain. But it is in New Orleans where they are one of the stand out food icons in a city already replete with glorious food icons and traditions.

And what do I do? I mess with a classic. Baked beignets. Probably the whole point of beignets for some are that they are deep fried. But, I can’t help myself.

As someone brought up in a home that observed many Lenten traditions, it is kind of in my DNA to be attuned to them. We still do the pancake thing for sure, but as pancakes are an everyday food for many of us I wanted to explore beignets. And introduce them to my non-American (and non-French) readers. Besides, it is hard on a food blog to advocate for one of the other Lenten traditions that I used to observe – fasting. 😉

So, are beignets just square doughnuts?

According to What’s Cooking America, the word beignet (pronounced ben-YAY) derives from the early Celtic word bigne meaning “to raise.”  It is also French for “fritter.” Beignets, a particular New Orleans specialty, “are fried, raised pieces of yeast dough, usually about 2 inches in diameter or 2 inches square.  After being fried, they are sprinkled with sugar or coated with various icings.”

So yes, a doughnut. But one that is neatly cut into squares and eschews the fancy hole. Also, doughnuts aren’t always made with yeast, but beignets most definitely are.

Fun fact: the beignet is the official state doughnut of Louisiana.

Do other states have state doughnuts?

What’s in a baked beignet?

Flour. Plain white is the norm but you could cut it with half wholemeal, I’m sure. As the only wholemeal flour I have right now in my pantry is bread making wholemeal, I did not try this option. I used soft pasta flour – aka “00” – rather than plain white/AP flour. Cake and pasta flour are interchangeable.

Yeast. Dried active is preferred but these turn out perfectly fine with quick yeast. However, I do recommend pretending the quick yeast is dry: mix it with water first before adding to the dry ingredients. Don’t know your yeast types? This article on epicurious will help.

A little sugar. This activates the yeast and only slightly sweetens the dough.

An egg. To make this recipe as vegan you can use egg replacer such as (affiliate link) Bob’s Red Mill Egg Replacer , but not chia or flaxseed eggs. Nor would I recommend egg replacers that contain carrageenan.

Fat. Just a little to enrich the dough. No deep frying, of course. I use Danish brand Naturli’ organic vegan (butter) block. It is hand’s down the best-tasting vegan butter I’ve tried. Their spread version is even better, but not so great for this kind of recipe. I buy mine at Sainsburys.

A vanilla pod. You can of course use a good quality vanilla extract, but if you can get a vanilla bean (I like Ndali brand, available in many supermarkets) and scrape the seeds out with the point of a knife or spoon, that is best. I’ve also bought this very nice (affiliate link) organic vanilla powder

, which is useful to have if you bake a lot. I like it in drinks, too!

How do I make baked beignets?

Read the recipe card for the exact how-to, but it is a recipe that requires time for the dough to rise. Twice. But it is a very easy dough to put together, and is lovely to roll out and cut. I use my stand mixer with dough hook attached for ease. But you can do this recipe by hand-kneading the dough.

Activate the yeast. Mix hand-hot water with a little raw sugar until it dissolves. Then stir in the dried yeast and leave it to get foamy.

Mix the milk, melted butter, salt and vanilla seeds in a bowl/bowl of your stand mixer.

Add in the yeast mix and stir/mix.

Then add the flour in a couple of stages, incorporating it well at each addition.

This is followed by a vigorous knead (15 minutes by hand/7-10 minutes with dough hook).

The dough needs to then rise until doubled in size (about 1 hour in a warm place).

Nearly there! Then you roll out the soft, vanilla-speckled dough, cutting and placing squares on a lined baking tray to rise once more.

Then finally the dough is slicked with a little more milk and baked for 10 minutes.

Voilà, baked beignets! You can make the warm chocolate dipping sauce while the beignets bake. For this you are mixing cocoa, a little sugar, almond milk and dark chocolate until lustrously glossy and irresistible. I added a funky British chicory coffee essence called Camp coffee for a mocha vibe, but keeping it simple and untainted is my favourite.

Do you fancy more baked treats that are a little different? My Brown Sugar and Spice Donut Waffles are very nice, as are these Pistachio and Olive Oil Madeleines. Or why not these Cherry and Cream Cheese Phyllo Hand Pies?

**Remember to follow me on Pinterest and, if you make my Baked Beignets, click on the pin at the bottom and leave a photo of your make with a comment telling me what you think, or any awesome changes that you made. Similarly, any Instagram posts tagged @food_to_glow using my recipes will go on my Story if I see them. I’m always so proud when you share my recipes with the world. Yay!!!

Whether on Pinterest, Instagram, Facebook, Twitter or of course here on the blog, I love to see what you do with my recipes, and I welcome your comments, star ratings, tweaks and suggestions. If you’ve made this recipe, please do consider rating it as it will make this recipe more visible on search engines. To do so, click the appropriate star underneath the small photo on the recipe card, below. Thank you!**

This is a baked version of New Orleans iconic doughnut, the beignet. Square pillows of soft yeast dough are baked and showered in confectioners' sugar then dipped into a thick, homemade hot chocolate sauce. A traditional Mardi Gras - Fat Tuesday - treat.

If making this for a vegan diet please use a vegan egg replacer mix rather than chia/flax eggs. The latter will not work well in this recipe.

To remove seeds from a vanilla pod, split the pod lengthways with a small pointed knife. Run the tip of the knife, or tip of a small spoon, along each half to extract the sticky, dark seeds. Set these aside to use in baking. Tip: add the hollowed vanilla pod pieces to a bag or jar of sugar to use in future baking.