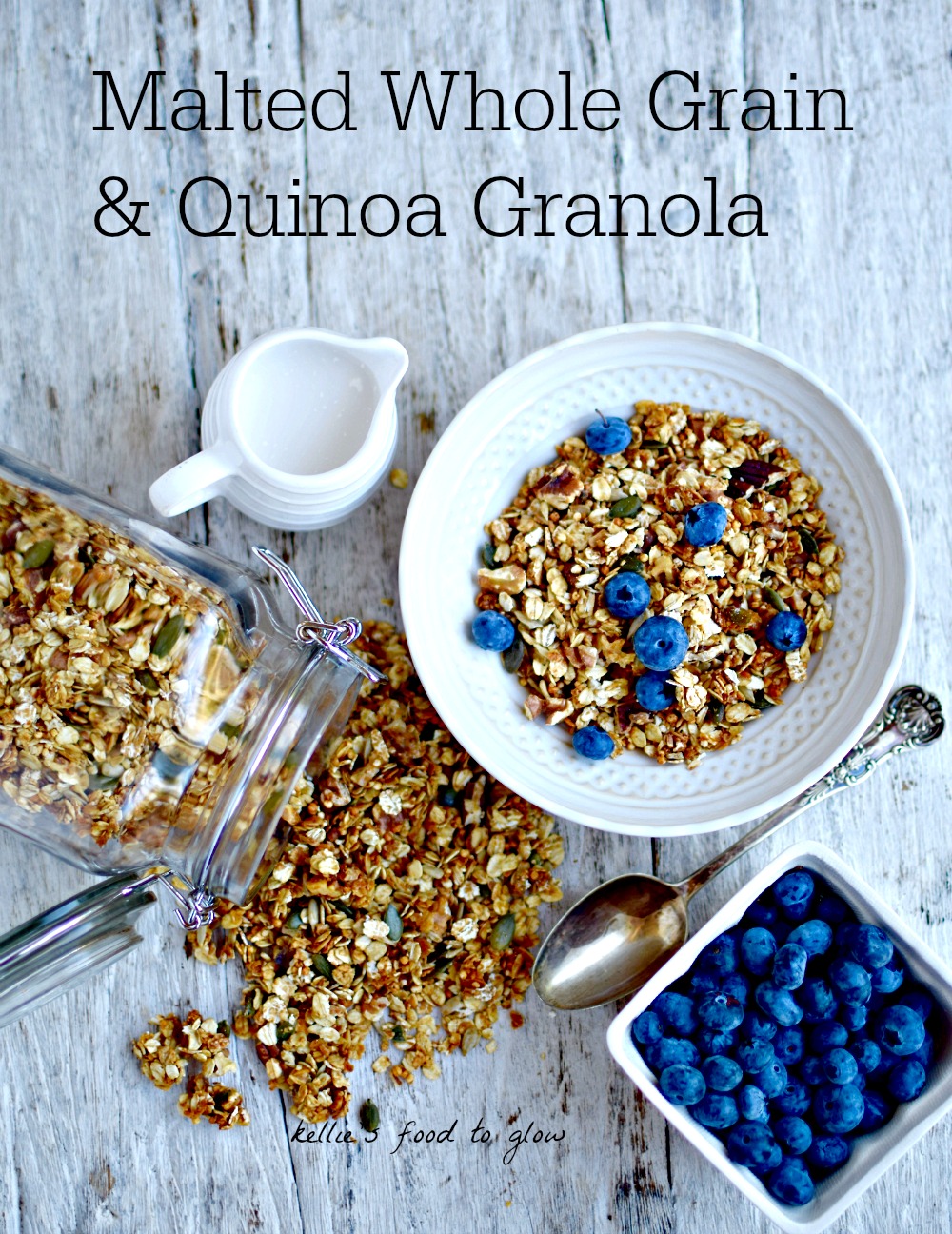 Granola made light and almost fluffy – not two words we associate with granola, huh? – with the addition of quinoa puffs. We love it not only for breakfast but as a wholesome snack the whole family will enjoy. Tastes great coating a frozen chocolate covered banana. Just saying.

Feel free to skip on down to the recipe, but if you are a blogger you might wish to read on…

For the past couple of months my heart has been heavy. With something akin to dread I have checked my phone, my laptop….my quickened pulse. If you are a fellow blogger, slogging away creating content of which you are proud to share with others, perhaps you have felt this heaviness, this weariness, this dread.

In late May I discovered that a site was taking my blog posts – lock stock and barrel. Not only posts as they were published, but posts from my archives. At first it was a few. This isn’t uncommon. I have the odd post taken without permission, as I’m sure do you if you are a blogger. When spotted I politely contact the infringing site and ask them to please remove the post. Mostly everyone is okay with this, not realising that they are breaking the Digital Millennium Copyright Act of 1998, a law that puts in practise, and expands on, two 1996 World Intellectual Property Organization (WIPO) treaties. Some however call me names or tell me that they will no longer follow me (I doubt that they did in the first place). I can deal with that.

With this particular site, the taking and posting of my work increased to over 20 a day. Twenty full posts in one day, complete with all of my images and internal links to myself – the best way to know if people are taking your work, btw – as well as links to others. My comments to the offending website, their host site in Canada and even to the host’s Twitter account fell on closed eyes. They even had the audacity to publish links to stolen posts on their Facebook page. Just over 100 posts found their way onto this site.

I contacted a solicitor, who kindly gave advice and was on standby with a Cease and Desist letter – although we agreed that it might not have much use in another country, and I thought perhaps contacting their few advertisers might be the best thing. What advertiser would want to have anything to do with pirated work? But I decided to give it one last shot on my own through Google themselves.

A Facebook friend had given me a link to the correct department (removals), and so I started filling in the forms. By now I had been spending a couple of hours every few days futilely filling in “abuse” forms on the host site. However I was confident that Google would have to do something – I mean they were my own posts and someone else was republishing them en masse. So, as the weekend approached, I felt happier and lighter of heart. I might have even smiled. But I wasn’t prepared for a sharp letter from Google questioning not only the validity of my claim but also whether I was the legitimate copyright holder. On top of it there was the suggestion that I would have to pay damages if I was not the legitimate copyright holder. I felt sick.

After a tense weekend trying to put this letter to the back of my mind I also noticed something. The stealing had stopped. I don’t know if the Google letter had been just an automatic one designed to weed out the troublemakers (if you don’t like a blogger, going to Lord Google is a good way to rattle them), or if they really couldn’t immediately see that I was who I said I was. What I think was going on was that other victims of this catchily-named site had been writing to Lord Google, too. I know of at least one person who was having posts stolen at the same time as me.

Speaking to techy folk it seems that this kind of thing goes on all of the time. Legit sites like mine are targeted and programmes are set up to take posts on publication and to scythe through archives. Apparently we aren’t to take it personally (!!) even when the stealing ramps up to harassment levels.

What is the point of these pirate sites? Who knows.

The point of this rambling path to an actual recipe is not to give up if you have your posts snatched from your site, or images stolen and repurposed. Don’t just assume that you can’t do anything about people and sites stealing your content. Big anonymous sites and hosts have to comply with the law, not just us little one-man band guys.

While still worrying about the Google letter I had a Facebook message from the other person I knew who was going through similar agonies with this site. She asked if I had tried opening the site. I immediately went to it and saw the blessed words “This site can’t be reached”. And one week later there is no message at all. And no site. I don’t believe this is the end, such sites sprout Hydra-like once cut off. But I think I’m ready for them now.

It has been stressful, but I’m proud of myself for sticking with it and getting the resolution that I wanted: not just for my recipes to be removed but for this bogus, piratical site – built entirely of the posts of others – to be taken down.

Now, for the reason you are really here – and thank you for reading my ramble if indeed you did – malty, yummy granola, made light with quinoa puffs. Because, let’s face it, we both deserve it.

Have you had issues with Internet pirates? How did you handle it? Do you think a granola recipe is good enough payment for reading a self-indulgent post?

Granola made light and almost fluffy – not two words we associate with granola, huh? – with the addition of quinoa puffs. We love it not only for breakfast but as a wholesome snack the whole family will enjoy. Tastes great coating a frozen chocolate covered banana. Just saying.

100g barley flakes (I get Real Foods own-brand ones)

50g each of pumpkin seeds, sunflower seeds and rough-chopped pecans

2.  In a very large saucepan gently heat the malt syrup, olive oil, sea salt and brown sugar until all is liquid and slightly bubbling. Stir well and immediately add in the dry ingredients. Fold over and over with a large spoon until all is lightly coated – really reach under and pull everything to the top. Pour onto the waiting, lined trays.

3. Bake the granola for 15 minutes, stir the granola (I use a spatula to draw the outside bits to the middle and push the middle bits out) and swap oven shelves. Do this again 15 minutes later. Then bake for five to 10 more minutes until it all looks dry and golden, but not at all burned.

4. Remove from the oven and let the granola cool completely on the trays before decanting into an airtight jar or other container. Keeps for several weeks. It never lasts that long though.

Soft food diet: Add 3 tbsp of peanut butter, tahini or almond butter to the liquid mix, and eliminate the nuts. When eating the granola soak in milk (warmed and allowed to cool as it sits on the cereal) until the softness that you need. Just because you need a soft food diet doesn’t mean you can’t have granola!

Instagram – behind the scenes with my recipe development (triumphs and tragedies!) and mini, Instagram-only recipes;

Facebook – posting on the latest nutrition and food stories, as well as sharing recipe links;