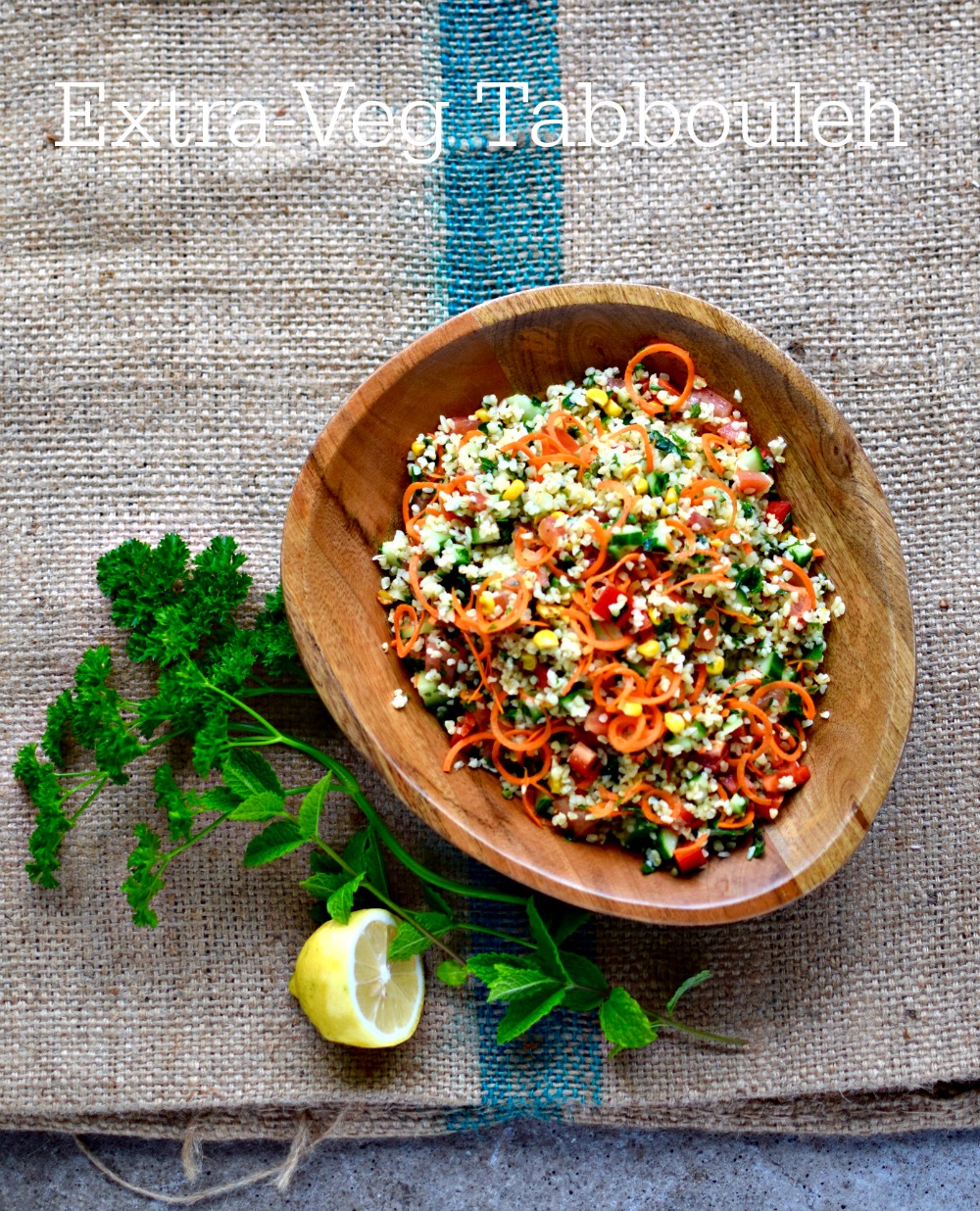 For a supposedly simple salad, tabbouleh, staple of deli counters around the world, has a lot of rules.

“It’s all about the parsley,” most purists say.

“Don’t cook the bulgur wheat, just soak it in the dressing,” say others.

“For heaven’s sake, soak the grains in two changes of water then dry it in the oven, or the texture will be ALL WRONG.”

Reading through recipes on the Interwebs there really does seem to be a lot of strong opinion out there. And even more variations after the basics of cracked wheat (argument over what size grains), parsley, lemon and olive oil are considered. Tomatoes are usual, but not universal. Cucumbers are common, but again, arguments over what kind. Onions – spring versus red versus brown versus not at all. To mint, or not to mint. What about spices, other vegetables, seeds?

I don’t know if you had noticed, but I’m not good with rules. Traffic rules, basic law and order, I’m fine with that. I don’t think I have knowingly broken a proper law. I have never  even had a traffic ticket. But if there were a culinary police I would be a lifer, of that I’m sure.

I’ve never met a recipe I didn’t want to tweak.

This recipe is the way little old Scots-American me has been making this crunchy, tangy, herbaceous salad for about 30 years. More or less. It really depends on what I have in the garden and kitchen that wants to go to the parsley party, but I try and always add at least one more vegetable than tradition says. Spiralled carrot, chopped red pepper, tiny nuggets of preserved lemon, pan-charred fresh corn, these are my summer standards. Speaking of summer please, for the love of God and all that is holy, don’t make this in winter. Just don’t.

I also sometimes add olives; occasionally a mini flurry of chopped lovage for a deeply herbal hit; cauliflower couscous if I am feeling especially virtuous. But not usually the amount of parsley that mamas up and down the Levant would say is correct. Tabbouleh in the Middle East is an homage to parsley; a parsley salad really. Which is fine, but I find it overwhelming if I am honest.

I know. I find something green overwhelming. Who’d have thought.

What is your favourite way to make tabbouleh? Are you a parsley purist with it? Any exotic additions to this summer favourite?

PS. Sorry for the lack of process pictures. I was making this for a nutrition class and needed to get a move on with the rest of the cooking!

If you have never made tabbouleh before but appreciate the healthy fresh taste of it, use this as a guide before striking out on your own next time. You can make it the day before, but I wouldn’t leave it any longer than 24 hours to eat it, or to polish off leftovers. Delicious for lunch, BBQ or a picnic with other summer salads and its best bud, hummus. This is easily grain-free and paleo by blitzing cauliflower into grains, or using quinoa. But then it really, really isn’t tabbouleh, and Middle Eastern mamas everywhere will tut and tsk.

Juice of one lemon and zest of half

Kernels from one ear of sweetcorn

1. Briefly rinse the bulgur wheat then pour into a wide shallow bowl. I use the bowl it will be served in. Pour over 250ml of boiling water as well as the salt and lemon, sprinkling in the za’atar if using. Cover the bowl tightly and leave the grains to soak for 30 minutes to one hour, depending on how absorbent your grains are.

2. While the soaking is going on, tackle the herbs and veg. Very finely mince the parsley leaves, mint leaves and garlic with a knife. Halve the medium tomatoes and deseed with a teaspoon; chop the flesh rather finely. If you are using cherry tomatoes just chop these. For the cucumber, if it has seeds (English ones do, while Persian ones have very few if any) run the teaspoon on either side of the seeds and remove. Chop fairly finely. Same for the red pepper. With the carrot, spiralise or coarsely grate. Dry-toast the corn kernels in a hot pan until some start to actually pop; but you can eat raw if you like. Finally, chop the preserved lemon, if using. It has quite a different flavour to the fresh lemon so don’t worry that this will be overkill on the citrus.

3. When the grains are lovely and plump, fluff them with a fork then fold in all of the chopped loveliness and the olive oil. If the grains are still a little wet, drain before adding everything else. This is absolutely fantastic with homemade hummus and my Moroccan Carrot Salad.

Instagram – behind the scenes with my recipe development (triumphs and tragedies!) and mini, Instagram-only recipes;

Facebook – posting on the latest nutrition and food stories, as well as sharing recipe links;

16 thoughts on “Not-So-Classic Tabbouleh. But Near Enough.”