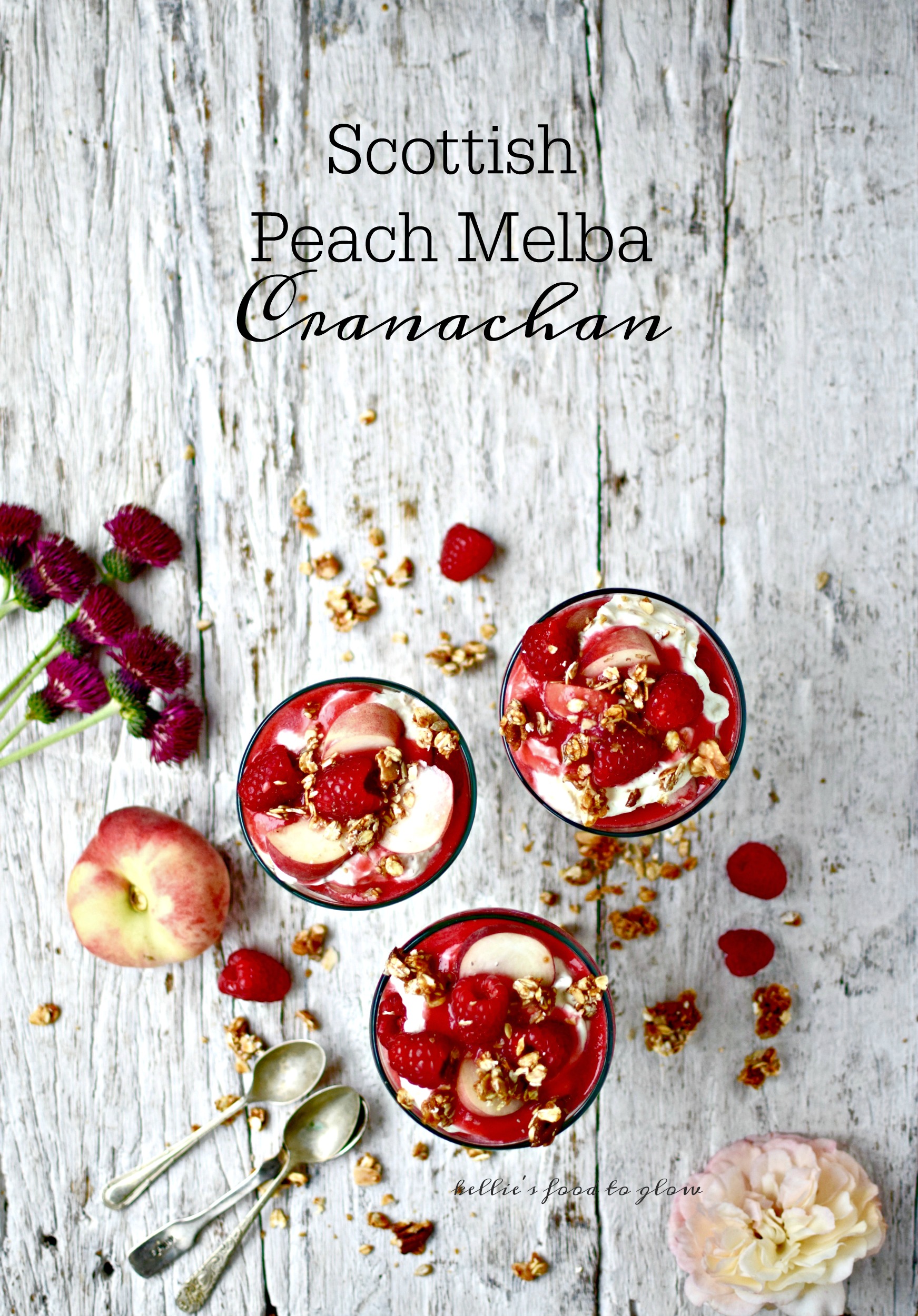 In Scotland, the berry season is hotting up as much as the weather itself.  Blueberries, blackberries, raspberries, tayberries, strawberries, red, white and black currants, loganberries, brambles, gooseberry – we are spoiled for choice.

When faced with a fresh juicy pile of berries all I really want to do is bury my face in them. Raw is usually the way I go, but here in Scotland, where berries are quite a thing, they have a fantastic, rather decadent, dessert where they are the star. As well as toasted oats, cream and, um, whisky – it is Scotland’s national drink. 🙂

Cranachan – pronounced CRAH-nuh-kun – is a much-loved pudding style of dessert typically consisting of sweetened, toasted oats (usually pinhead rather than porridge/rolled), fragrant raspberries, a luxurious soft cheese called crowdie, and a good measure of whisky. Unbelievably, this rather boozy pudding used to be a breakfast dish! Modern, healthier, interpretations abound, so I thought I would throw my bunnet into the ring and come up with my own.

My version doesn’t stray far from the original, but I have lightened things up just a little, cut back on the whisky and used homemade, fruit-free granola to replace the sugared pinhead oats. I’ve also layered rather than marbled the whole thing, more because I am rubbish at marbling. I would just get pink cream rather than pretty garnet swirls.

Where I’ve really gone a bit mad is adding peaches into the mix. I was trying to cut a bit of the added sugar so hit upon the idea of a peach melba – for you youngsters, that is culinary code for peach and raspberry flavours. And it really works. So, if you have some very ripe peaches, do use them.

As we are really quite flush with berries in the summer months, I tend to do a lot with them. Here are some Food To Glow berry recipes if you fancy a little summer fruits inspiration:

Rhubarb and Strawberry Salad with Almonds, Mint and Lemon Verbena

What is your favourite berry, and how do you like to eat it?

400g Quark (or half Quark and half double cream/heavy cream)

1. Pour most of the granola into your blender and pulse until the granola is nubbly and of fairly uniform size. Decant into a bowl, saving the intact granola for your topping.

2. Chop the peaches and add two-thirds to a blender with two-thirds of the raspberries. Blend until smooth. Push the fruit puree through a fine sieve with a spoon. Set aside.

3. Whip the Quark until fluffy – I used electric beaters but you could just use a whisk. Fold in the honey and whisky, tasting and adjusting as you wish. Fold in the nubbly granola. If you are using half double cream/heavy cream, whip this separately and fold into the Quark before adding the rest of the ingredients.

4. Now it is a matter of layering. Add a few pieces of saved fruit to each glass, top with a spoon of nubbly cream, some sauce, and more fruit, then another layer of each. Top with the saved whole granola. Chill for at least 30 minutes before serving. This tastes best on the day it is made.

*you could cut the sugar even more by just dry toasting 75g pinhead/steel cut oats and using instead of the granola.

Soft food diet: Blend all of the fruit; blitz the granola very finely and allow time for it to be softened by the Quark mixture – a few hours will do.

A Taste of Britain

This recipe is created for the Rennie’s A Taste of Britain celebration. I swithered between making something with Scottish salmon (I love salmon!), but I thought you would appreciate a little Food To Glow decadence. It’s been awhile, hasn’t it?

Rennie © is the UK’s favourite heartburn and indigestion tablet, helping the nation combat the effects of stress, spicy and acidic foods, overindulgence and late-night eating. As part of their 80-year celebrations, they wanted to share the flavours of Britain and the stories behind them. I am happy to share what I love about Scottish berries with a new recipe featuring one of its most famous desserts. I hope you enjoy it. 🙂

Disclosure: I created this recipe for Rennie as part of their birthday celebrations. I was not required to write a positive review and any opinions are, as always, my own.