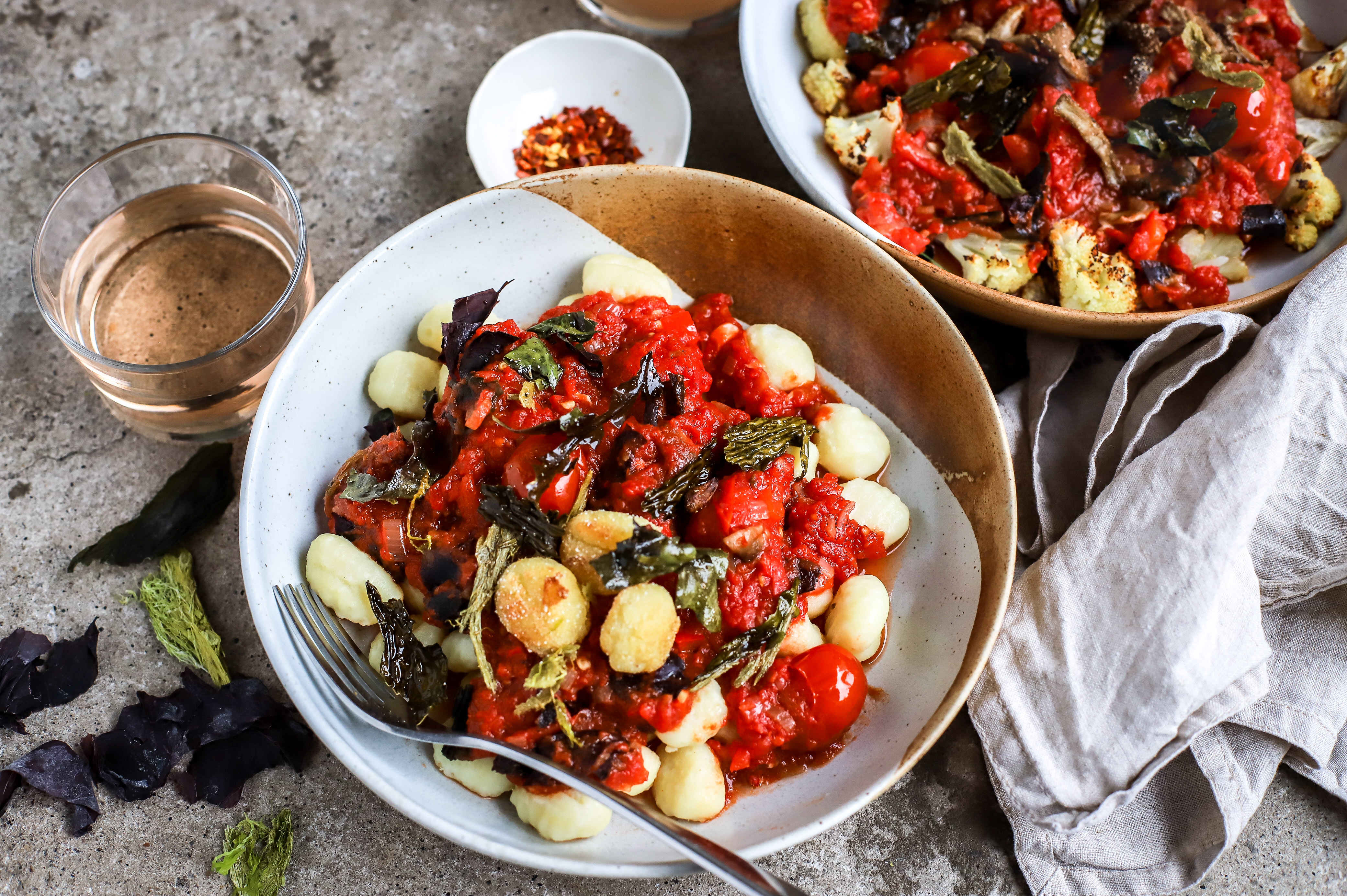 Seaweed and Shiitake Marinara Sauce is a simple tomato sauce, bursting with cherry tomatoes and enhanced with nutritious dried seaweed and fresh shiitake mushrooms. It goes superbly well with gnocchi, pasta and even roasted cauliflower. Vegan and low-carb.

heirloom tomatoes – you may use these instead of canned tomatoes in this recipe.

Tomatoes are going strong here in the UK, so let’s talk about tomato sauce.

Tomatoes are one of those fruit-vegetables that are welcome in most any category of recipe – sauce, pasta, gratin, tian, bake, bread, juice, pie, tart (and here’s another one from me), soup, sandwich, salad. Even dessert. And they are a proper cross cultural food; the base of many a sauce – from Italy to India. But we associate them most strongly, perhaps, with sauce. And Italy.

I am here to subvert this slightly. As you would expect.

What’s different about this marinara sauce?

This tomato sauce comes together in just a few, fragrant minutes. And the only chopping required is some garlic cloves, a handful of mushrooms and half an onion. It is bright and clean-tasting; brilliantly-red; and exudes the essence of tomatoes. So far, so normal.

What makes this tomato sauce different is the funky introduction of seaweed and shiitake mushrooms. Don’t think however that this is Asian. Sure, you could probably use it as a stir-fry sauce (cooked down and spiked with soy and ginger). But it is blissfully good spooned over pan-fried gnocchi, silky, cooked linguine – and even golden pieces of roasted cauliflower. To wit: this seaweed and shiitake marinara is not just a flavour boost for plain pasta.

I’ve used dried seaweed – from the highly-rated, UK independent online retailer, Indigo Herbs – for its umami and unique flavour. Despite it being a vegan product, just a few grams in this recipe brings an intriguing briney taste of the sea. It is subtle though. You can add more to give a pronounced seafood vibe. But I am going for whisper of the sea rather than foghorn. And besides, I will exhort you to fry up some extra seaweed – straight from the packet – for a light, crispy, salty topping. So good!

The product I use here is “Irish Sea Salad”. It is a delicious, very more-ish, blend of chopped organic dilisk, wakame, sugar kelp, nori and sea lettuce – all sustainably harvested from the pristine waters off the west coast of Ireland. You could also go single source with any other of their own-brand range of seaweeds – such as Irish sea lettuce, sea spaghetti, pepper dulse, wakame, gutweed or kombu. But I think that the salad version is the one most suited to this sauce, and would go in a wide range of recipes.

Whichever seaweed you go with, know that it will be packed with essential nutrient iodine, which is something that some of us can be quite low in. Most edible seaweeds are also high in beta carotene, phosphorus, B2, B3, potassium, calcium, magnesium, iron, copper and manganese. Seaweed is also fairly high in sodium, so although I say to season with pepper I don’t think you will need to add salt. Let the cooked sauce sit for five minutes, give it a taste, and hopefully you will agree that it is agreeably savory without need of added salt.

Other than seaweed, what’s in this seaweed and shiitake marinara sauce?

Optional red pepper – I just had half a one to use up!

Shiitake or other mushrooms

Extra fried bits of shiitake, seaweed and gnocchi to garnish

I realise that the idea of this sounds a bit bonkers, but I know that you trust me. If you fancy winging it though, instead of my recipe why not just add some Indigo Herbs Irish sea salad – or any of the other seaweeds – to your own simple tomato sauce? If your recipe includes dried herbs, maybe leave them out and let the seaweed guide the flavour.

no guesses who got the gnocchi version!

Indigo Herbs is an independently-owned retail site for all things natural health. As well as an extensive range of health products, they have an A-Z herbs and superfoods reference section, a comprehensive natural health guide, recipes (I really fancy these vegan mushroom gyoza), a blog and more.

Do you use seaweed in your cooking? What other kinds of recipes should I make with seaweed?

An easy tomato sauce, bursting with tomatoes and enhanced with nutritious dried seaweed and sliced shiitake mushrooms. It goes superbly-well with gnocchi, pasta and even roasted cauliflower. Vegan and low-carb.

This sauce may be frozen. Use within three months.