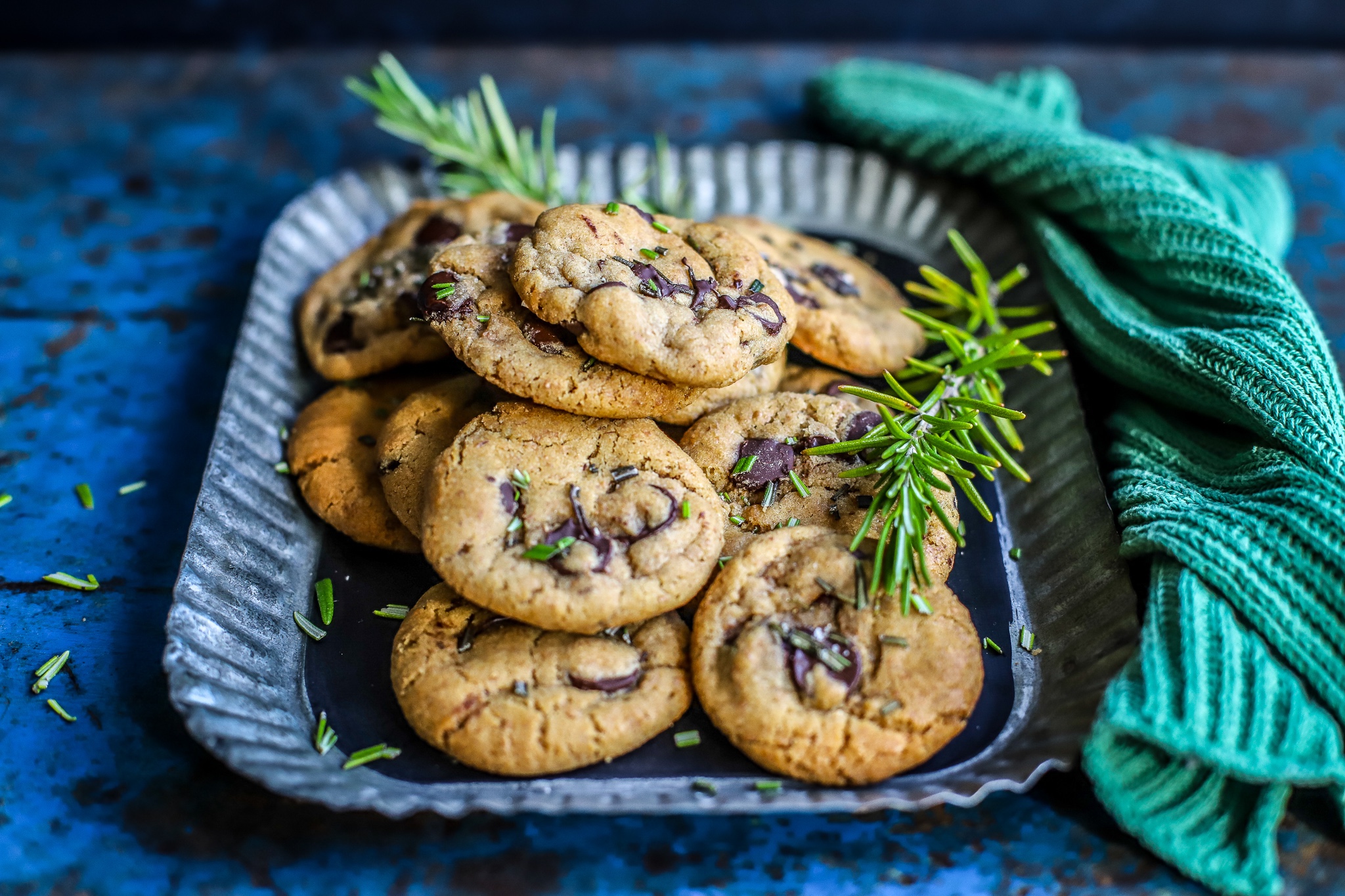 A tray of cookies just warm from the oven is irresistible. The urge to pop half of them in my mouth at once builds as the aroma wafts teasingly through the house. Who on Earth has the inner discipline to wait until they cool down? Not me, that’s for sure.

And why resist? Certainly there is no need to curb sweet desires when it comes to these rosemary chocolate chip cookies. Maybe not demolish the whole tray’s-worth. But as these are deliberately a small-ish size, and you know what’s in them, who could blame you?

I’ve never ever been a fan of bought cookies. Well, never is quite a strong word. When I was a kid, a Pepperidge Farm Milano (the original one) was a special treat. That and a sip of my Mom’s General Foods International Coffee (Cafe Vienna, from recollection).

I was quite the classy kid. 😉

But ever since I was trusted not to burn down the house, I preferred baking my own cookies. I didn’t beg my mother to make cookies: it was me who did the actual baking from about age 8. My Mom was stellar on actual meals, but wasn’t a frequent baker. So, being basically a greedy kid, I quickly learned that if I baked a small batch of cookies, and ate the evidence, I wouldn’t have to share. Luckily I was a typical skinny kid of 1970s Florida, swimming daily and running around getting filthy-dirty until after dark, so clandestine latchkey-kid baking didn’t show. Except if I forgot to wash my face. Or clean the kitchen.

I started baking by ‘helping’ (I’m sure I was more hinderance) my friend Pam’s mother, while Pam herself styled dolls at the kitchen table. And my first bake was chocolate chip cookies. I still remember having to sit on my hands while they were cooling, such was my urge to just grab a hot cookie, the molten chocolate puddling in dark craters. It was sheer torture. Still is.

The original Nestle Tollhouse chocolate cookies are the gold standard of this genre. Purposefully invented (not an accident, as is often the case with delicious recipes) by Toll House Inn chef/owner Ruth Graves Wakefield and chef Sue Brides in 1936, they quickly became must-bakes. When women of Massachusetts (home of Wakefield) started sending care packages of these soft, chewy chocolatey cookies to their loved ones fighting overseas in WW2, they not only were shared around, they were requested by other soldiers. Wakefield’s cookbook, with this star recipe, was endlessly reprinted. And a nation gave thanks.

Many recipes for this iconic cookie abound, but most of us choose to riff on the glorious original. Tweaking as we see fit. Such as with the fat.

Fats – what to choose

The original recipe featured all-fat shortening – an ingredient that confuses non-US folk. Because this type of fat, even with re-formulations, is now considered a bit of a fail, most opt for butter. Which, to be honest, tastes much better. But little else other than the choice of fat has changed. Vegan butter subs are, with necessity, quite processed; most have at least eight ingredients. Butter has one. Or two if it contains salt. But vegan butters do have some good features, so if you are vegan get the one that has the best taste. Most of us shouldn’t be eating much added fat anyway. Obviously these cookies are a treat. I’m not saying they are healthy. 🙂

Butter, European style is best, but a good vegan butter such as this Danish one by Naturli’, can be successfully used.

Sugar. I use half white (evil, I know) and muscovado (dark brown) in partial keeping with the original. Feel free to sub in all coconut sugar if you wish. But, as these are treats not a meal, I suggest this ratio. Because, science. 😉

Flour. A mix of white and wholemeal, or even rye. I haven’t made these with gluten-free mixes but there are tons of recipes that use it as a direct sub, including this one on the King Arthur website.

Baking powder and baking soda. Just a little of each. Because, again, science. Or, in this case, serious experimentation.

Vanilla. Essential. Get the good stuff, because you’re worth it.

Salt. A smidge. Some flaky sea salt for the top if you are feeling fancy.

No eggs. Just water and olive oil. This, my friends, is the egg substitute. If you’ve not tried it in cookies, you really must. I have nothing at all against good, local, organic eggs. But if you have run out (me) or are baking for someone with allergies, this is a grand little trick. Although it is missing the protein of an egg, the fat and water of the ratio in this recipe works a treat.

I found about about this trick when I was wanting to make some cookies but didn’t have any eggs, and didn’t want to take extra steps to make it vegan (e.g. aquafaba or chia eggs). And lo, Lord Google pointed me to Holly’s eggless chocolate chip cookie recipe on keepinglifesane.com. And it was a great success. For the first batch I used goat’s butter, which was amazing. But both normal butter and vegan block “butter” work extremely well.

Chocolate chips. American semi-sweet chips are classic, but anything that you like – including vegan – will work. Different cocoa contents and fat levels do, however, affect the melt. This article on Epicurious tells all. I personally use Callebaut 70.5 Percent

(UK Amazon affiliate link). I also like an artisan bar or two chopped up and added if I don’t have any choc chips.

Fresh rosemary. I am a big fan of rosemary and chocolate together. The combined taste, when not done to excess, is an intriguing mix of sophisticated and earthy. I even have it in this recipe for Chocolate and Rosemary Banana Bread.(below)

In this recipe its distinctive resinous aroma and taste is as topping rather than folded into the dough itself. This deliberately namy-pamby approach makes it a safer bet for sharing, as you can choose to keep some free of flora for the less sophisticated snacker. Otherwise known as children.

Are these difficult to make?

Not at all. It’s a one-bowl affair, with no beating the ingredients until your biceps bust through your sleeves. Just make sure the butter is softened. It is a “starter” cookie, in my opinion. No fancy equipment, no special skills. Just a desire to make some kickass-awesome chocolate chip cookies.

And you do desire, don’t you?

PS. Why not save some cookies – chilling much longer than you see in an above image – and make ice cream sandwiches? These are sooo much better than anything you buy at the supermarket.

A note on size: These make smallish cookies, so if you want the kind you get at the mall, just make bigger dough balls. You should only need to increase the baking time by one minute.

Freeze rather than keep. Rather than store cookies in an air-tight container, why not bake them fresh every time? Make up balls of dough and freeze on baking paper until hard. Tumble these hard dough balls into a labeled bag and pull out what you need and bake when you want them.

Ice Cream Sandwiches! Be sure to save back an even amount - or double the batch - for sandwiching your favourite ice cream. Cool the cookies completely, as in at least an hour, and place a small scoop of ice cream in a few and press on another cookie. Put on a tray and pop in the freezer overnight to fully freeze. Soooo delicious and much better than anything you will buy in a box at the supermarket.