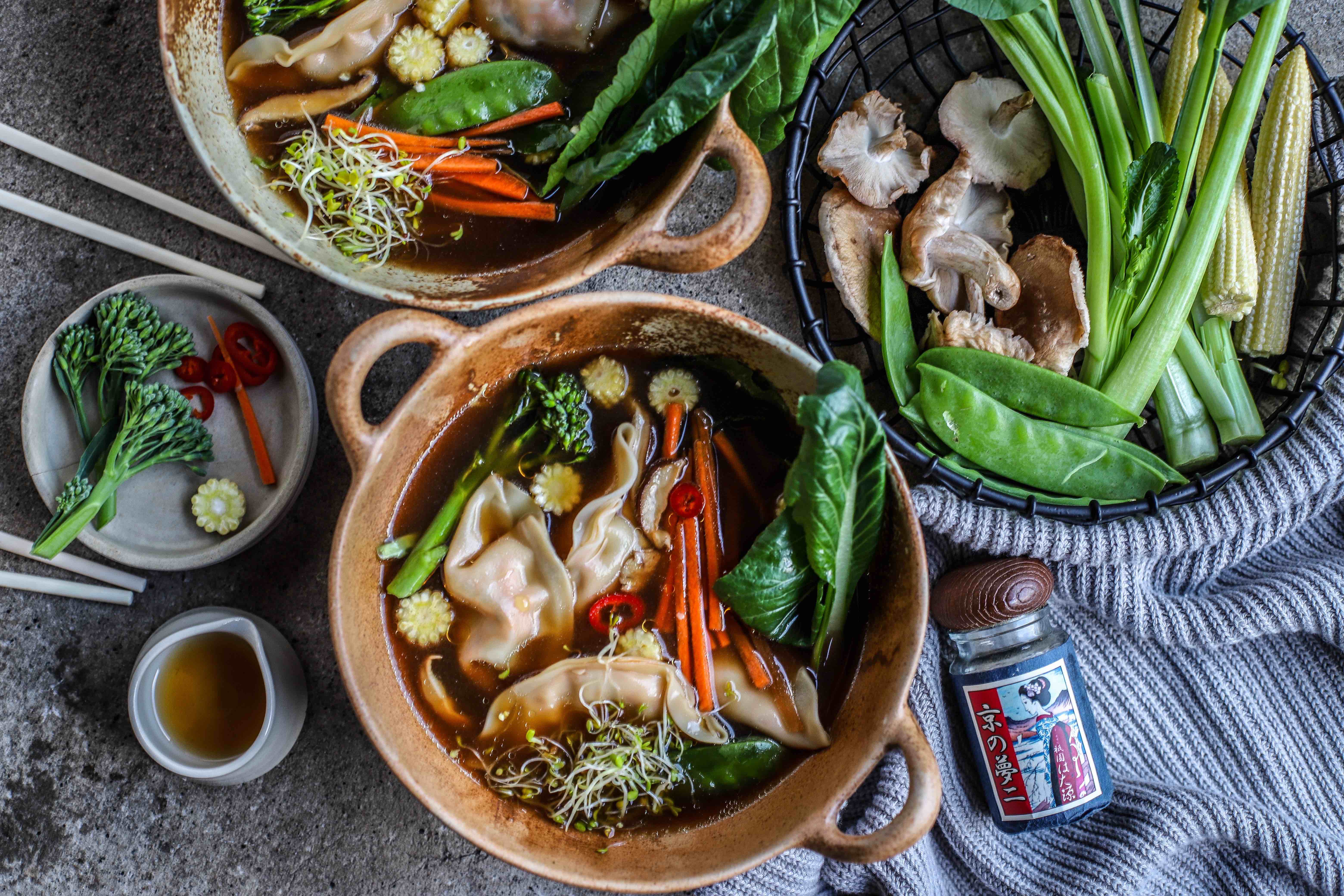 Slurping this garlic and ginger-spiked broth, earthy with dried shiitake mushrooms, takes me back to Japan. I have been fortunate to have twice-visited this captivating country, enjoying food in both a Michelin-starred, dream-like setting and, more commonly, family cafes, hunched at the counter, shoulder to shoulder with shop workers and students. The one thing in common: broth. Hot, steamy, silky broth.

Now, if you are up for it, read on about our deeply awesome experiences of having soup in Tokyo. Otherwise, skip on down to the recipe. No hard feelings. :-)

Our Japanese trip recounted in bowls of soup

At Daigo, sitting cross-legged in our private dining room with our hosts, overlooking the beautifully-lit garden, Andrew and I enjoyed a succession of exquisite, vegan kaiseki dishes, each more intricate yet simple than the last. Where the previous tidbits were quite baffling to us as to how to “tackle” them, soup, a unifying dish in any language or culture, was easy. The opaque, earth-red broth, with the tiniest, tastiest morsels, was meant to be picked up and slurped. It was so unutterably delicious that I sat with the carved cup poised at my lips, just letting the savoury liquid trickle into my belly, expanding its warmth to the whole of my being. It was quite spiritual. The whole meal was one that I can’t imagine ever forgetting. The company of our two charming Japanese hosts, the elevated tea house setting near the foot of Mt Atago, the breathtaking food and presentation, the attentive, kind service by kimonoed staff. We were even escorted down the moonlit hill by men with flickering lamps. I felt like a princess.

Contrast this to the second-wettest day of our trip. After a morning spent dotting in and out of quirky shops in the textile district, our umbrellas and extremely dodgy-looking (read: completely see through) rain jackets getting properly baptised in the approaching monsoon, we stopped for lunch. Well, not so much stopped for as hunted for. We had read about a cafe that served what some considered to be the best ramen in Tokyo. After walking past its door, oh at least six times, circling around in the pouring rain, we entered dripping, my glasses immediately steaming up. Once cleared, I could see that this was a pretty interesting little joint. With the look of a small, very plain American diner of old, it was completely filled with people holding steaming bowls of soups, some noodley, others with dumplings. Lots of enthusiastic slurping.

Baffling to us, there was no obvious way to order food. No menus. No servers. Just white-jacketed chaps viewed over the large open hatch, pulling noodles and filling bowls. Then we turned and saw the hulking vending machine. Looking like a repurposed cigarette machine rather than the ubiquitous pavement-side drinks vendies, it was sequentially numbered, had Yen prices, and only a few descriptive Japanese characters at each button. As we were not in a tourist area there were no helpful pictures. We eventually fathomed that if we pushed a button and shoved in the requisite monies a ticket would be dispensed. Feeling brave, but also knowing that nothing really bad would happen, we pressed two higher priced buttons, two lower priced ones and buttons we rationally assumed were drinks. We took the tickets to the brightly-light hatch and grabbed the only seats left, right there at the hatch itself, waiting to see what on God’s earth we had actually ordered. We knew it would be soupy. And delicious. But by the variety of bowls around us knew that we were really ordering blind.

We did indeed get our bowls – ropes of fresh noodles subsumed in milky-red broth in one bowl (slices of pork and an egg on top), and an elemental, mushroomy broth, with a side of finely sliced raw vegetables that we had ordered on the basis that the lower Yen price choice would be a side dish. We got lucky as one of the sides we saw near us looked to be caramelised fish. 🙂

Most of our meals involved some kind of nourishing, brothy concoction – including breakfast. On the basis of that alone I could happily live in Japan if it meant that broths all day, every day, was an actual thing.

With that in mind I have been playing with getting to grips with my own fragrant, Japanese-influenced broth. I have had this particular one for both lunch and breakfast, adding in a soft, halved, very messy egg to the latter to feel more breakfasty. But I prefer the purity of the way I have it here for you today: just a scattering of thinly-cut vegetables and juicy, bought Japanese dumplings. I think I prefer these gyozas in broth rather than drizzled in sauce as an appetiser. And I find them much easier to grab than noodles. But if you prefer to go with noodles, you do you.

Oh gosh, this is ripe for tweaking, isn’t it? Go crazy!

What ways do you enjoy shiitake mushrooms? Haver you ever been to Japan? How did you like the food? Did you fall in love with soup and broth all over again?

Incidentally, our rainiest day in Japan also involved soup. Probably the most memorable of all our soups on that trip. But that story is for another time. 🙂

**Remember to follow me on Pinterest and, if you make my Shiitake-Ginger Broth, click on the pin below the recipe card and leave a photo of your make with a comment telling me what you think, or any awesome changes that you made. Similarly, any Instagram posts tagged @food_to_glow using my recipes will go on my Story if I see them. I’m always so proud when you share my recipes with the world. Yay!!!

This Shiitake-Ginger Broth is light and deeply-nutritious, floating just a whisper of thinly-cut vegetables and a few juicy gyozas. The perfect antidote to heavy winter food.

To Complete the Soup

While the broth is simmering, saute the fresh mushrooms in oil until cooked through.